We attended the Beagle Welfare Show last weekend, it's nice to support some of the charity shows and gives the children some additional practice, and a chance to catch up with like minded people.

Luckily it was held on the only dry day of the week, however the ground was still quite wet, but was well supported.

Tasha handled Tilly to win the Sporting section, and Eleanor handled Maddie to come 2nd in the Open.  As Tilly had won a pedigree class she wasn't eligible to enter the other classes, one of which was the junior handling class so she needed to borrow a dog.  Eleanor was already handling Maddie in the same class, and Christopher was borrowing her for the older age category of this class.

Tasha asked if she could handle a Leonberger, quite different from a Munster or a Toller!  Sue Toffee's owner had some reservations on whether she could cope with him, but Tasha being Tasha took him off for a practice.  All seemed to be going well so she took him in the class.  She did a fab job and won the class with Eleanor 2nd with Maddie.  Christopher then took Maddie in the win the 12 - 16 yrs class, so we had brother and sister in for the challenge!

Again Toffee went really well for Tasha and just had the edge over Christopher with Maddie.  Special thanks have to go to Toffee for being such a willing replacement, and to his owner Sue for very kindly entrusting her cuddly bear to Tasha. 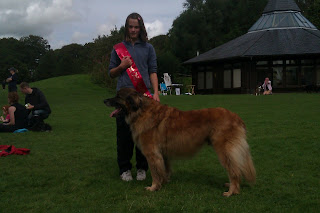 Posted by Seahaven at 09:50 No comments:


We eventually made a decision to go to the WKC show, but only for the day.  A nice early start to ensure that we were there in plently of time for the YKC Obedience competition that Christopher and Eleanor wanted to attend.

Eleanor handled Maddie in the Starters Obedience and Christopher handled Tilly in the Elementary class.  Both had clear stays, dispite many dogs breaking stays around them.  The YKC were really considerate regarding the showing and allowed both the children to have early rounds so that they could them concertrate on the showing.  This was very much appreciated as the obedience had been moved to a hanger miles from the breed rings!

Both had really good rounds, and informed me that the dogs worked well for them.  We then quickly relocated to the benching, after a quick breakfast!

Due to classes clashing Chirstopher allowed Eleanor to handle Tilly in the breed class, and he kept a watchful eye on them both whilst I stayed by the Munster ring.

Ruth had kindly brought Fae (Seahaven Celtic Seren) to the show to be shown in the minor puppy class.  Well she was so well behaved, never being shown before or handled by me since she left us as a little puppy.  She won the class!  So another one qualified for Crufts next year.

Eleanor gained a 3rd with Tilly in Post Grad, and Maddie has a 2nd in Limit in their respective breed classes!

We hadn't had an opertunity to go back to the YKC rings to see how the children had got on, so when we saw Pat who ran the event we had to ask her as it had all finished.  Eleanor was thrilled to have been awarded 3rd with Maddie!

Well done to all.
Posted by Seahaven at 15:07 No comments:


A Toller family get together was organised to take place at the Open dog show that is run alongside the Pembs County Show.  This was Coopers (and his owners first show) and four tollers certainly caught the attention of the general public!

Well all came away with a handful of rosettes.  Cooper won AVNSC puppy, with Milly 3rd, Tilly had a 2nd in the Open (sadly Red wasn't in time for this class, as Jane had been held up in the show traffic).  In the gundog puppy group Cooper gained group 2!

In the rare breed class, Tilly won, with Red 2nd and Cooper 3rd (and best Rare Breed Puppy).  Sadly Lucy hadn't entered this class, otherwise it might have been tollers 1 - 4!

In the Munster classes Maddie had a 2nd in the Open, with Max 3rd, who also gained the Best Puppy in breed title.  Max then went on to gain group 3 in the Gundog Puppy Group.

Rosettes continued in the Junior Handling Classes.  Tasha won the YKC handling with Eleanor 2nd, Tasha has qualified again for the Crufts JH class!
Christopher is starting to make some progress in the older age group and gained a Reserve place with Tilly, a place that he worked really hard for.

Well done to you all, a bit of a boost after the events of the week, and a big thankyou for attending.
Posted by Seahaven at 10:33 No comments:

Well it has certainly been a busy week here!

Christopher has been in Croatia, myself and the girls went to Paignton Champ Show, and Sean kindly stayed home to keep Trio company.

I towed the caravan down to Paignton myself so the first time, and managed to set it all up fine.  Sadly the weather didn't hold for the showing on Sunday and we had a huge thunder storm with torrential rain whilst we were in the ring (acually I think it was like this all day!).  After drying Maddie off Eleanor took her in the junior handling class and came a creditable 3rd.  We took Max so that he could go in the puppy dog class and Jess brought his brother Rookie for this class as well.  To Jess's amazement Rookie won the class, with Max 2nd, a huge achievement as the other puppies were much older and had been shown before.  Both are now qualified for Crufts 2013.

Maddie gained a 3rd in the Post Grad class which we were pleased with as she is still rather short on coat!  She then had a jumping class and gained a clear round.

On Monday Maddie had a clear round in the jumping class, and a 3rd in the agility.  This is her hightest placing for agility, so rather proud of her competing against all those fast collies!

Milly attended National Gundog and the United Retriever shows, gaining a second place in puppy at each show.  Well done Lucy and Milly!

Posted by Seahaven at 15:20 No comments: 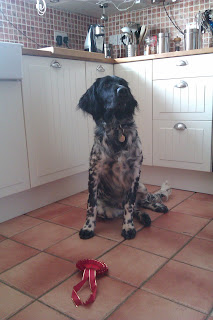 Max is currently on holiday with us, and we decided that we would take him to Cardigan Agricultural Show for the afternoon and enter him in the dog show.  He took a while to settle as all puppies do in new surroundings, but he had to contend with sheepdogs herding duck past him, and hounds and horses all around him.  Well he settled down and we entered him in the most handsome dog class, which he won!  We are very proud of him, as are his family!  Well done Max.
Posted by Seahaven at 18:17 No comments: