I had my doubts, it was with a group of dogs he doesn't know, in a hall he has been in  three or four times, and he is Mr Sociable; the life and soul of the party. I didn't think he would give me heelwork off the lead around the group of dogs, more fun to play of course, but he was brilliant and even offered me competitive obedience heelwork, which I gladly accepted as he trotted around, head up, tail outstretched, flicking his long legs up in a stylish trot!

Very proud of him and pleased with how he is maturing.

Yesterday was Gundog day at Windsor Champ Dog Show, and Seahaven was well represented by both Munsters and Tollers.

The day was rather an early start to get there ready for judging of the Munsters at 9.30, so to avoid the commuter traffic we left before light.  The day dawned bright and warm, perfect for a day of showing with a gentle breeze to start.  It did get a bit warmer in the afternoon but the rain held off until we left for home at the end of the day.

Sadly Libby wasn't able to join us as she was in season, both Libby and Carol were greatly missed and it would have been lovely to see her again.

Megane attended with Hazel, and I was delighted to be asked to handle her in the junior class, where she gained a 3rd and has now qualified for Crufts 2014.  Hazel took her into the Junior Stakes class where she went well but was unplaced in a big mixed class.

Tasha had Trio in the Good Citizen Class, which she won, and then went on to win the Post Grad class.  She went beautifully for Tasha and I was very proud of them both.

Cooper was entered in the Post Grad Dog class, a large class where he it was obvious that he wasn't enjoying the heat and time in the ring.  He really didn't show himself at his best and Dawn worked hard to get the best out of him.  Sadly he wasn't placed, but there's always next time and we all love him just the same.

This was Eve's first show, and a big one to have as a debut!  She didn't let us down and Eleanor really did give her a lovely experience of showing.  Eve was entered in the World Puppy Stakes Class before her breed class, with a large entry of over 40 dogs and over 20 in attendance.  Eleanor showed her well and her hard work was rewarded with a 4 th place.

We (Eleanor)  had planned on having a go at the Good Citizen Bronze Test, and we persauded Dawn and Hazel to take Cooper and Megane in as well.  Both Eve and Megane passed the test and Cooper missed out by a whisker, just breaking his stay.  It it quite difficult to complete the test in the show surrounding as there's so much going on around the ring to distract the dogs.

Well done to all, and thank you for being such a good crowd.

With the recent talk of swimming, I would like to share, for your enjoyment, the video of Rookie's first swim at around 6 or 7 months old.

He did not swim for a while after this atrocity of an attempt!! But a few months later and he is a real water baby.

Here are a few recent pics of my handsome clown!

Hi all!  Today I went to the Gnoll Park for a local dog event in aid of Prostate Cancer.  The show was split into Obedience and Show Classes, and as it was all for charity I had a go at both.  I entered the basic (novice) obedience, with five other dogs.  Good fun and, truth be known, novices we certainly were (as well as our handlers - Dad took me in)!  It was not something that Trio, Maddie and Tilly would have recognised as Obedience!  Getting me to do the Down-Stay was nigh on impossible because I was not on best behaviour, but when all was done I was awarded a Third prize which Dad and me were amazed and delighted with.

Afterwards Mam took me into the Sporting Dog class whilst Dad disappeared.  I'm more familiar with Mam taking me round, and getting more comfortable with what's expected of me in the Show Ring, and Mam and me got a red rosette this time.  Dead chuffed as there were a dozen of us in there - but only one Toller!

I went forward to compete in the Best in Show, but didn't pick up anything there - it went to a Pembrokeshire Corgi, with a Wire-haired Daschund as Reserve. But it was great to see the Toller breed get that far anyway.  Loads of people came up to Mam to ask what I was and were really complimentary about my looks and behaviour (show ring anyway).

It was lucky for the organisers that the weather kept dry because it was all outdoors, but there were loads of different dogs entered and I think a lot of money raised for a worthwhile cause.
Time to chill now so I'll speak to you again sometime.

Cooper would love to meet these two

Found this lovely video by accident just now.  I know these aren't Seahaven tollers but hey, that pup is so cute it could almost be one of Tilly and Red's!!
And a brilliant Dylan soundtrack - great choice.

Hope you'll pardon the break from protocol but nothing exciting has happened to me this week!

Love
Cooper
x
Posted by Cooper at 19:55 No comments:

Today was a good day! Milly took her paws off the bottom and finally doggy paddled! I think she's getting more confident- it's only taken her 21 months! 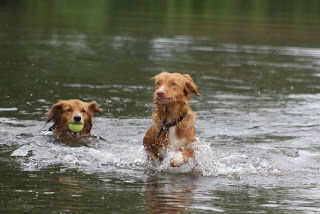 Lots of bouncing to begin with! 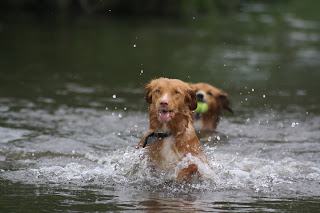 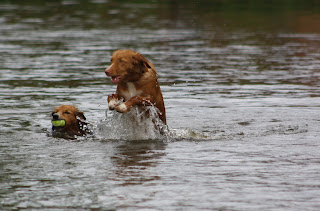 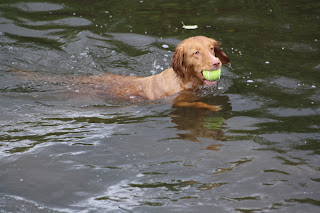 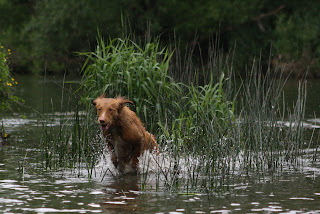 Today was the launch of the 'Young Barnlaker's' YKC agility team with their first event at Golden Valley.

It has been difficult getting enough children interested and competing to make a team, but we seems to be making progress and have enough to make a team at last.  Sadly we didn't factor in children taking exams, not being ready to compete yet, and dogs coming into season!

From a team of 6, we managed 4 and that was by mixing dogs and handlers!  Never to be put off we went ahead leaving when it was still dark (and that takes some beating at this time of year!), driving rain and strong winds to arrive before the 8.00 briefing.

For the team event 6 pairs are permitted to run the course  (with one reserve) and the best 4 scores count.  All of our scores needed to be counted, and the children really rose to the challenge.  A few faults were collected but no one was eliminated so all scores could be counted.  Having watched all of the teams we didn't think that the team was in the running for a placing and watched and cheered the first two teams who had qualified for the Crufts final.  Later Tasha went to collect a clear round rosette that she had won when she was told that the team had in fact finished 4th out of 7 teams and only a few secs separating them and the 3rd placed team.

One of the nicest things for me was to see two of my  children gain a Judges Special rosette for good handling when things haven't gone quite to plan.  Very proud of Christopher and Eleanor for gaining these along with CRs for all, and Eleanor gaining a 6th with Bobby in the jumping class.

Eve came along and had a great time meeting dogs and being fussed over by people, now home fed and getting some much needed sleep.

Posted by Seahaven at 20:10 No comments:

Agility & Showing - all in one weekend!

The sun shone for the whole weekend, such a change from this time last year.

It was a girlie weekend, as it was myself, Tasha & Eleanor along with the munsters which started off on Friday afternoon in Monmouth.  We camped Friday and Saturday night, competing in the agility on the Saturday.  Beautiful sunny days but still quite cold overnight, I think we all could have done with a few extra layers! 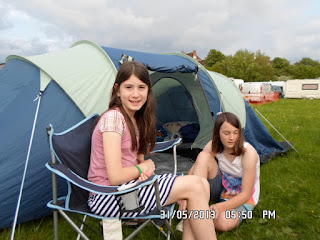 The agility was held on Vauxhall Fields, next to the river Wye and only a short walk in to the historic town of Monmouth, a fabulous venue.

An early start on Saturday where Maddie and Trio competed in the Jumping, Maddie having a clear round and Trio collecting a few time faults.  Maddie ended up just outside the placings, but did come home with a clear round rosette.

Two agility classes  later in the day, Trio sadly missed the entry for the seesaw, as Tasha slipped on the approach and so picked up 5 faults which would otherwise have been a good clear round.  Maddie also picked up 5 faults on the weave, but was very pleased with how the dogs had run.  The last class, we also both picked up some faults as did quite a few dogs - I think there was a BBQ going on in that cormer of the ring and the dogs went around with noses in the air for half of the course!

We had to be organised Saturday evening as we were going to be travelling up to the LMC Champ show on the Sunday morning.  A quick pack up of the tent, early Sunday morning and driving off as many were driving on for the day felt a bit strange.

We had quite a good journey and arrived not long after they had started judging the dogs, again the sun was shinning so we were able to put a blanket down and sit ringside to watch and prepare.  It was lovely to catch up with friends again and put some names to faces!

A lovely relaxed day where we came home with a lovely collection of rosettes.  Best of all Eleanor & Tasha won their handling classes, both doing a really good job.  Very proud of them all.
Posted by Seahaven at 21:26 2 comments:


My Mam and Dad have started taking me along the Neath canal on a more regular basis recently.  We've got a really nice couple of miles that are fairly secluded, and you've the benefit of being able to spot what's coming towards or behind you from a long distance!  That way you can't easily be ambushed by any thuggish dogs - you see two weeks ago today I was attacked without warning by a Staffie in my regular woods and I'm really lucky to be able to write on this blog.

I'm fine now - will have scars on my face where the beast locked onto me but you'll have to look hard to find them.  I think without Dad's help he'd have finished me off so I'm pretty grateful to him - have another beer on me Dad!

Anyway, moving on - that canal is great.  I've had frisbee retrieve from the water this morning.  Take a look at what a toller looks like having a good shake - 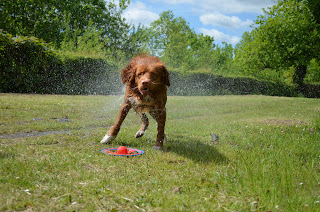 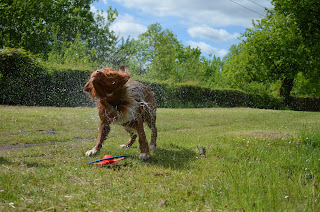 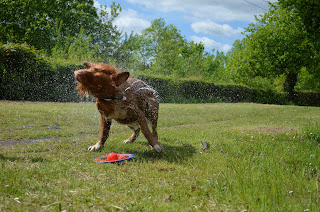 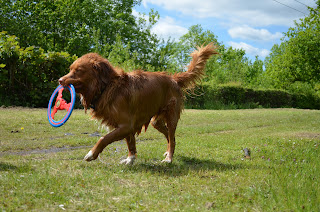 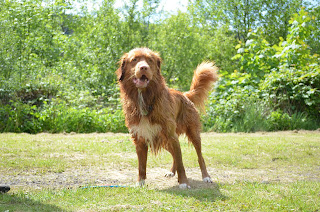 Then on the way back I met two new friends in the water.  They weren't interested in playing frisbee with me so instead we all went for a swim together.

It was great fun until they went off to do their own thing, so I had to go home with Mam and Dad and have a bath again to smell nice enough to be allowed back in the house.  I can't wait to meet them again though!