Hope You're All Enjoying The May Bank Holiday!

First of all an apology!  I had said that not a lot had been happening in recent weeks.  What I did forget to mention was that Ziggy came to visit a few weeks ago.  Ziggy is Trio's sister and although we've been in contact since she left all that time ago, we hadn't actually seen her and her owners since she left as a eight week old pup!

We had a lovely time, lots of kisses and then a good romp on the beach with sister Trio, and mum Maddie.  She is so much like her mum! in looks and personality.  We'd arranged a latter meet as the girls were keen to come along too and see them all again.  I had hoped to meet up again later in the week but what had originally been a quiet week turned out to be exceptionally busy so this was difficult to fit in.

Will have to wait for the pics off Tasha's camera - and the reason I didn't remember (I use the pics on the phone to remind me what we've been up to!)

The bank holiday started with a beautiful day on Saturday, and with the children away for a few days we made the most of it.  We took Eve out to town and the car boot sale, where she took meeting some rather strange young people in the form of the YFC (Young Farmers Club) who were dressed up in some amazing costumes in her stride.  Lots of people and dogs to meet, so quite a pleasant morning. 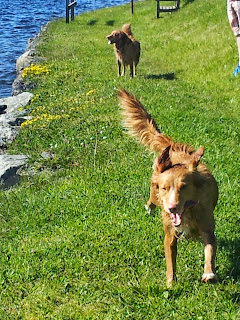 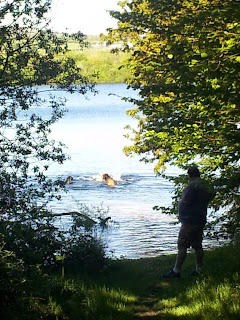 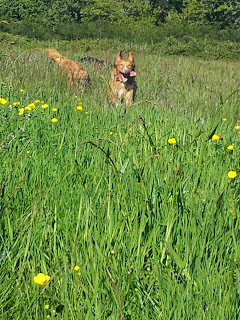 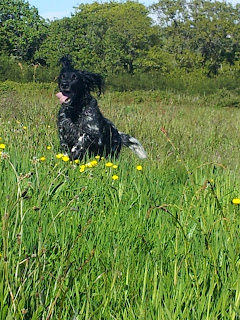 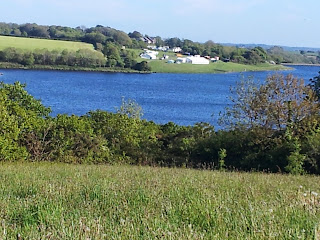 We had planned on taking the dogs out in the afternoon but were surprised at how hot it had become so decided to wait until later in the day.  We had been talking about going around Llysyfran reservoir for some time, but it's a long walk, and we knew that the children would want to go too.  Anyway we decided to go ahead anyway!  The dogs had a fantastic time, taking the opportunity to cool down in the reservoir or streams along the way.  The whole walk is six and a half miles, and we have commented on the need to fix the GPS on the phone on to the dogs collars just to see how far they go.  They certainly do at least twice as much as we walk and at a much faster pace.  They only slowed down for a short period about half way round and were still running at the end.  Not bad considering Maddie is nearly nine, she certainly keeps up with the younger dogs.

Posted by Seahaven at 20:06 No comments:

Well the weeks are passing us by and summer seems just around the corner for us now!

We took all of the dogs to Aberystwyth Show on the bank holiday weekend and were delighted to be awarded Best of Breed in both breeds - Eve and Trio doing exceptionally well in their respective classes.  The girls did well in the handling, we didn't stay till the end for the stakes classes as these would have been quite late in the day.

Off to the National the following weekend, a very early start due to the YKC stakes beginning at 8.30 am!  It was a show with very mixed results for us, but that dog showing for you - win some, loose some.  For the first time in ages Eve left the ring without anything!

However we were there to support two of Tilly's puppies making their showing debuts.  Tegan (Seahaven Bewitched by Cedarlake) and Pippa (Seahaven Magic Spell) both qualifying for Crufts 2016 at their first show!  Tegan with a 2nd and Pippa with a 3rd in minor puppy and then a 2nd in puppy!  It was a lovely day seeing these two again, and they seemed to enjoy the show environment and especially the chance to have a romp together after they'd finished in the ring.

We fared slightly better in the Large Munsterlander ring!  Trio (Seahaven Borrowed Heaven) was awarded Res in Limit Bitch in a really strong class.  Tasha also had her entered in the handling where they were shortlisted from a good entry and came away again with a Reserve.

We also took the opportunity to have Trio's eyes tested in preparation for mating her last month (hopefully she comes into season as planned!) where she passed.

It was a lovely day catching up with some of the Seahaven family and friends, we look forward to seeing you all again soon. 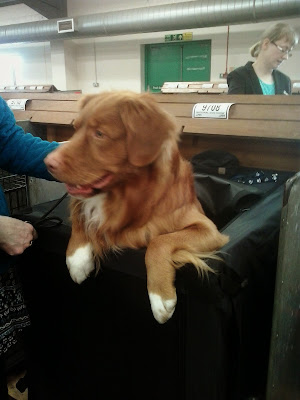 I don't have anything remotely interesting to update with, just wanted to share some photos of Rookie from the last couple of months! 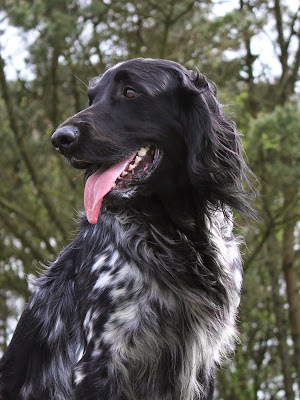 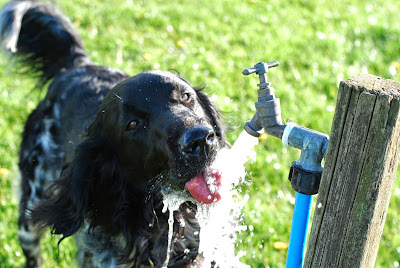 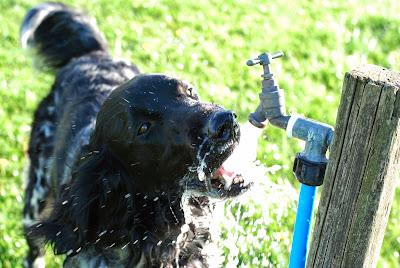 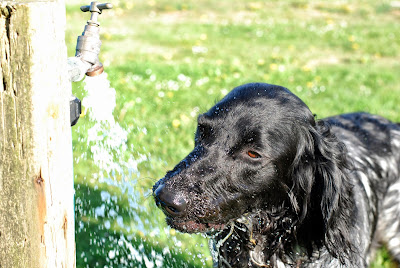 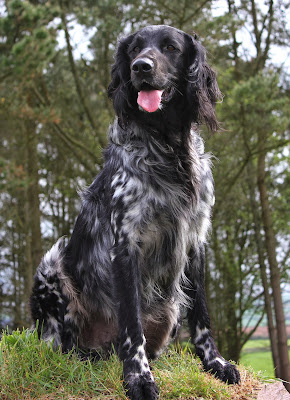 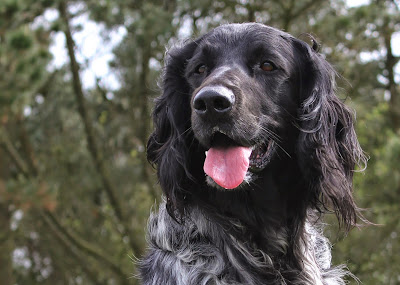 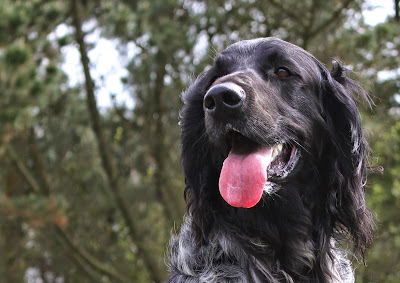 The Return of Cooper

Wow. Or rather "Bow, wow, wow". I've been away a long time, partly due to a sabbatical from the showring in the last few months of 2014 and partly due to me sorting out a few computer issues. But I'm back!

Firstly, I'd like to welcome all the new pups and I hope to meet some of you in the fur in the future. My favourite meet is Newgale beach not far from Seahaven and when you've grown up a bit, why don't you come and play with the big doggies - but make sure you like the water first because you will get wet. It's been great to see photos of you on the Seahaven blog and how quickly you are all growing. We aren't pups long.

Secondly, I've been back in the show world in 2015. Donna has already covered Crufts, where Seahaven dogs had some fabulous results - even those big Munsters who always get to the ball or frisbee first!  But on 26 April I went to WELKS (West of England Ladies Kennel Society) Show, held in Malvern Showground. There I was entered in the Toller Class, in Open Dog - with the big boys. It was held outside, on grass, and I like being outside if it's not too hot. I went well and won Open Dog, then Best of Sex, and went up against Best Bitch for Best of Breed. And got it! 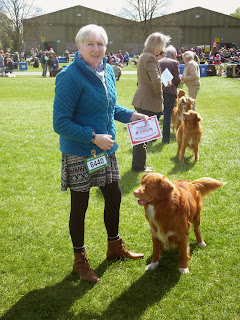 But then you have to represent the breed in the Group Judging, up against the Best of Breeds from all the other gundogs, 27 of us in all. I'd done this twice before and never got anywhere but this time I was shortlisted to the last 10, an amazing honour for me because loads of these dogs were Show Champions.

It was a brilliant day for me and Mam and Dad, but a very long one. Thankfully there was a Gordon Setter bitch, attractive thing she was, benched close to me in the main part of the show. We got on like a house on fire - and she was right next to me in the Group judging. You can't ask for much more than that at a show can you? And stay within the rules of course! 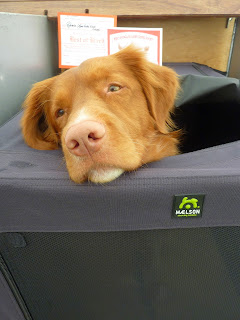 So, you youngsters, never let anyone tell you that because you have ginger fur you can't make it in life, no matter what you try. Because there's loads of things we can become good at.

I've seen Tollers jump as high, run as fast, swim, dig, scent, show off and particularly eat as well as many in the dog world. You, like me, were given a really good start in life. The rest is now up to you. Don't let me down. I'll be watching.

Fantastic day at Aberystwyth Open show today with the dogs where we did the double taking Best in Breed for both Breeds!

We took all four and had a lovely day catching up with friends, the day stayed day - not glorious sunshine but at least we stayed dry.

Trio won the Open LM class and Best of Breed under judge Richard Morris, with mum Maddie coming 3rd.  Maddie hasn't been shown much now as we have concentrated on the younger dogs but had a lovely time.

Under judge Wendy Bebb in the NSDTRs Eve won the Open class and again Best of Breed, with her mum Tilly then coming 3rd.

The girls handled all of the dogs today, doing a quick swop from one breed to the other.  In the handling Tasha achieved a 3rd in the YKC handling and JHA, whilst Eleanor had a 2nd in the JHA class.

We didn't get anywhere in the huge group in the gundog group, but such a privilege to have two Seahaven's contesting.

Posted by Seahaven at 19:33 No comments:

They have all now reached the milestone of six months, halfway to their first birthday!

I think all will agree that the time has passed incredibly quickly, they are no longer the fluff balls that left here at the end of the year.

First off we have Tegan who was Buffy in the litter. 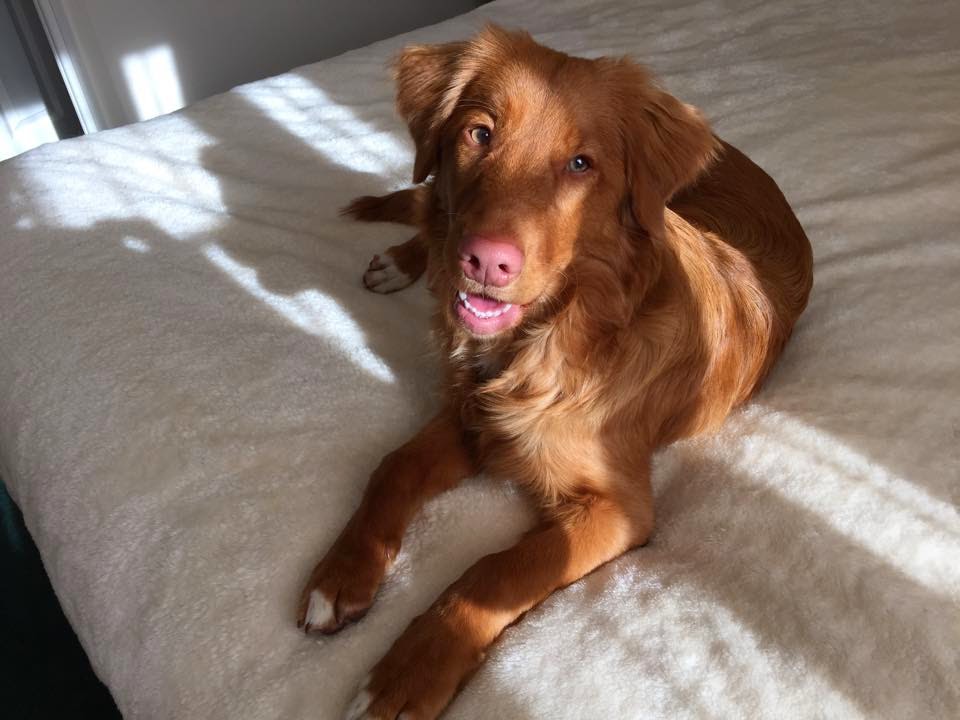 And Amber who was Spell in the litter. 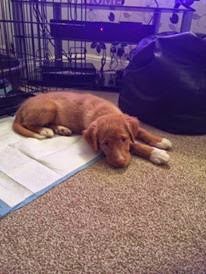 And now Toby, who was Jack. 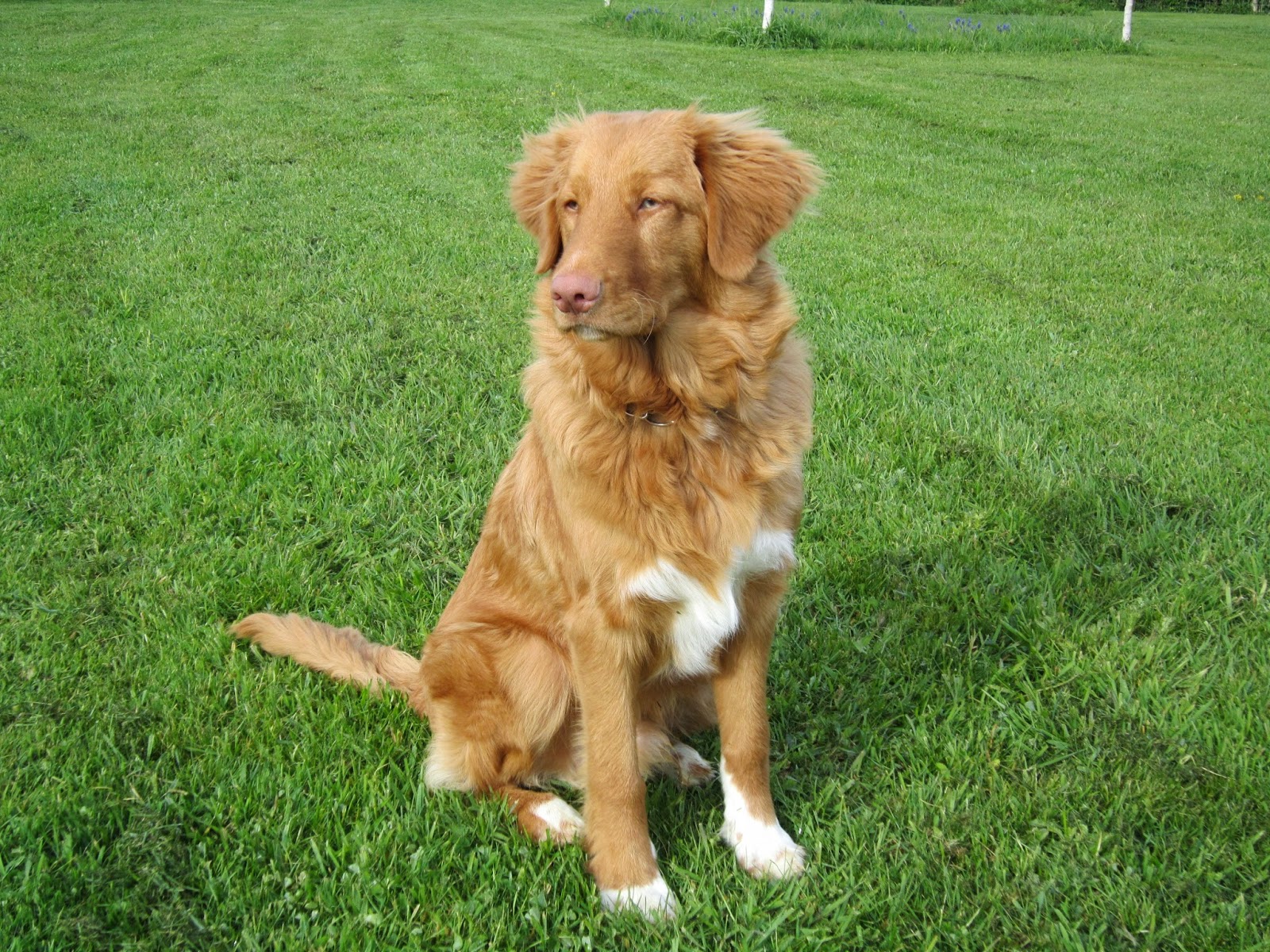 And another - Pippa (was Pippi) 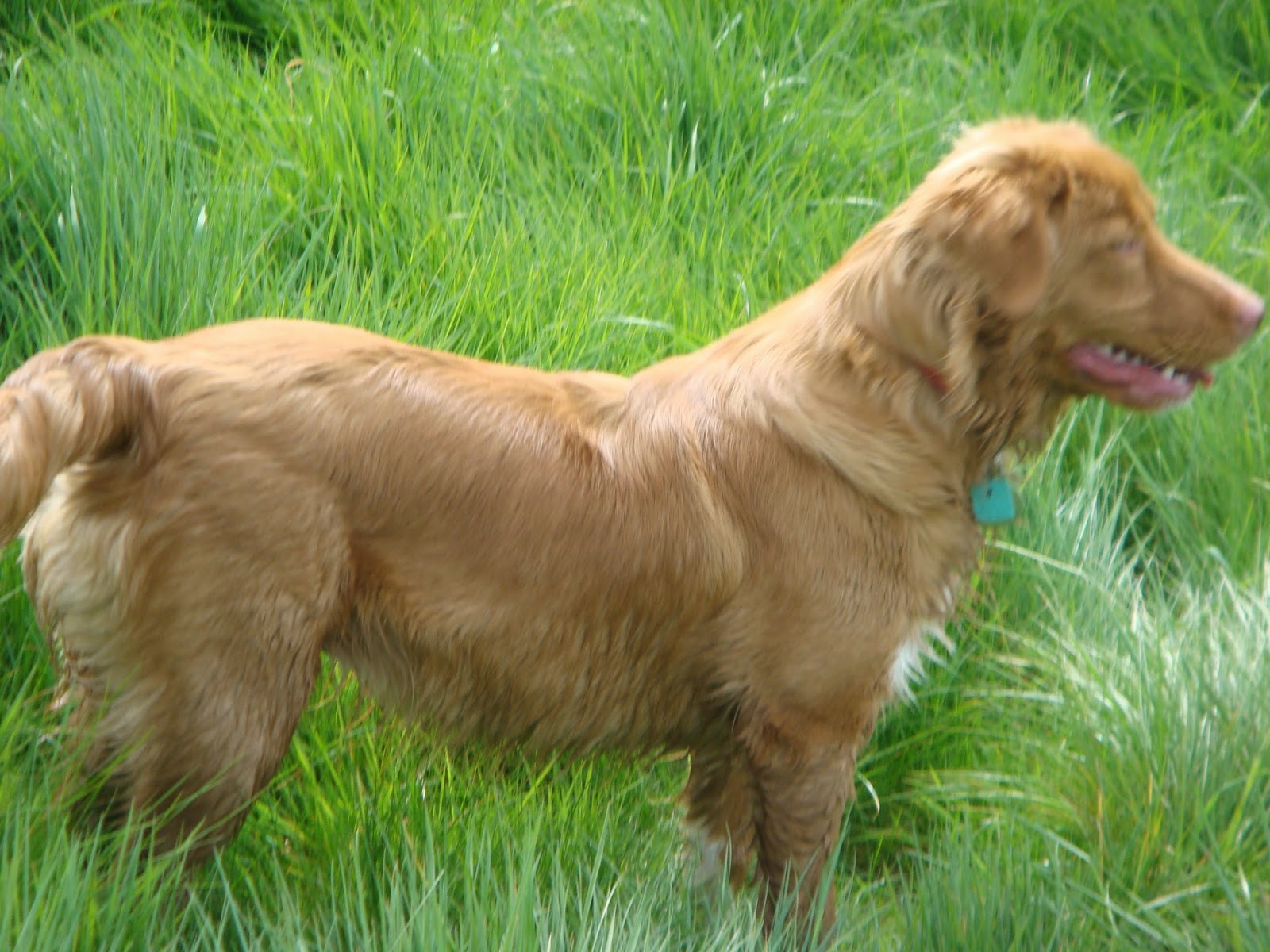 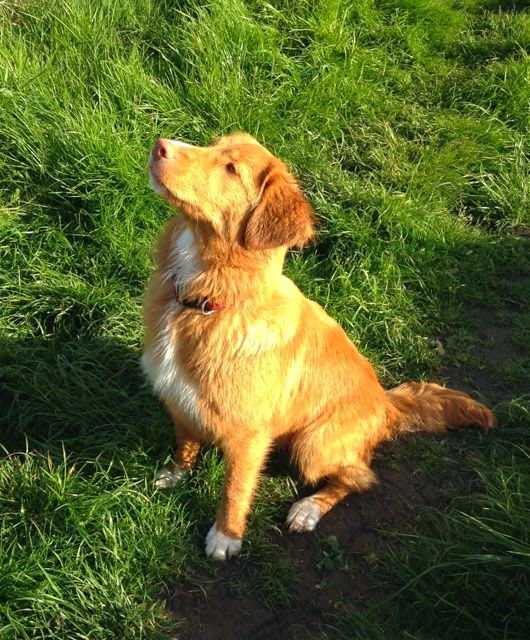 And finally Foxy, who is now known as Rana 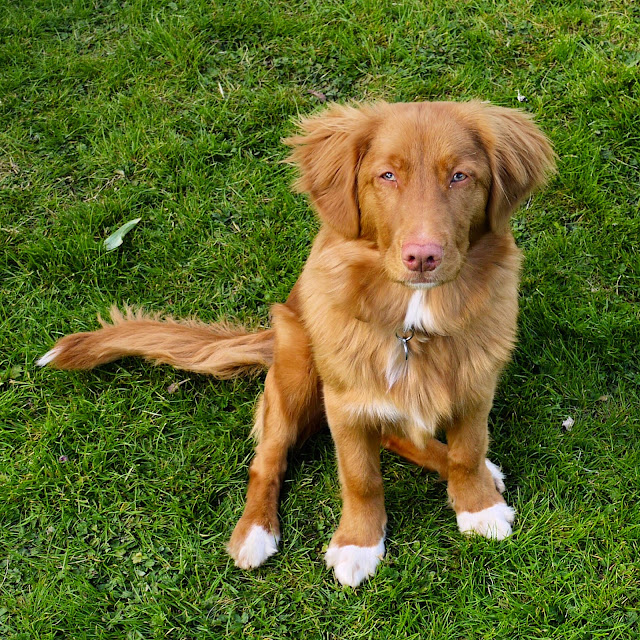