Thursday, the first day of the four day show was gundog day. Being a school day, I travelled up alone, something that I haven't done in a long time.  The travelling wasn't too different as the girls tend to listen to their own music, so they're not great company really on a long drive. I did miss then once we arrived and realised how well we all work together.  Great help though was provided by Coopers parents, which was really appreciated.  The weather was sunny, and hot! What a contrast to Aberystwyth show on Monday.

Only two of our dogs entered, Lyric (Seahaven Limited Edition) and Eve (Seahaven Parish Bell), with the two breeds being miles apart.

Eve was first in, in a large Limit Bitch class and poor girl was rushed from her crate into the ring without much chance of a leg stretch.  After a lot of deliberation by the judge (Frank Kane) she was awarded 2nd place. I was delighted with this result  and even more so when he called me over to say what a lovely well balance girl she was and told me to get some weight off her! Think we'll have to have Eleanor doing some more running with her!

Judging of LMs had now started so, I very quickly took Lyric off to the LM ring where she was entered in Minor Puppy (for pups 6-9 months). She was the only one entered, and just hoped that she would go nicely and enjoy herself. Her time in the ring was short, and it would have been nice to have had some company for her to get used to others being in the ring with her, particularly when moving together. As she won the class we had to wait for the final line up of all of the unbeaten bitches, not expecting her to gain anything else, but best puppy bitch needed to be awarded. So she then competed with the winner of the puppy bitch class (6-12 months), we were astonished to be awarded best puppy bitch. We then had to wait until best of breed had been declared, which was won by the lovely Tia. Again we didn't expect to win against an older male puppy who is much more mature, but she did.

Our gorgeous girl had her champ show BPIB and got to strut her stuff in the group ring. Nothing in the group, but she got to make friends with some lovely puppies. Her friend NSDTR Betty was in the group too, so a great opportunity for them to have a play before judging commenced.

Bank holiday Monday saw us travelling to Aberystwyth for an open show offering both of our breeds, classes.

This has always been a favourite show of the year, large outdoor rings, good judges, lovely atmosphere, and usually good weather. Sadly the weather wasn't in our favour, and gundog judging was moved indoors for the duration of the show.

The girls had a 3rd and 4th in both handling classes, Tasha borrowed Cooper who went beautifully for her in the rather limited space offered in the ring.

Absolutley delighted with how all of the dogs went, we stopped on the way home to give them a run on the Preselli's which they all thoroughly enjoyed.
Posted by Seahaven at 15:20 1 comment: 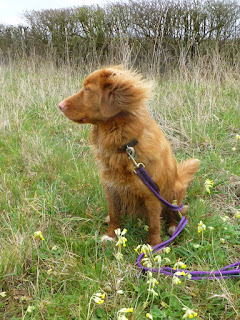