We would all like to take the oppertunity to wish you and your dogs a very happy Christmas!

Enjoy the time, and lets hope that we have some better weather so that we can enjoy the great outdoors with our dogs.

Thank you to all those that have sent cards, and photographs, they are very much appreciated and we take great pride in these, so thank you all once again. 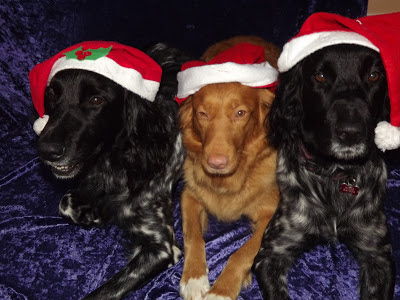 Posted by Seahaven at 16:55 No comments:

We missed quite a few agility shows over the summer due to the weather, seasons etc.  So it was great to actualy attend a show!  It felt like it had been ages since we had had a proper competition.

We only took Maddie and Trio, and shared the lift with my mum and her dogs.  Tasha and Trio picked up a clear round in the helter skelter, and had 5 faults in the other two rounds.  Most importantly she managed to get over her fear of the seesaw, she might have done it slowly but  she did it none the less!  Tasha did a great job handling her, getting the balance of being calm, clear and encouraging just right.

Maddie managed to miss the weave entry on the first round, and after watching the other competitors realised that it was due to me setting her up slightly off centre to the first jump so it wasn't in her line of vision.  Most mistakes are handler errors!  She also picked up 5 faults in the other two rounds, due to knocking poles.

Mum on the other hand managed to pick up two 2nd places and some clear round rosettes with her dogs.
Posted by Seahaven at 20:19 No comments: