Well I know a lot of people have been eagerly awaiting the arrival for puppies from Trio!  Sadly it isn't to be this time, we are all along with people on the puppy list absolutely gutted.

Trio however is delighted to once again be allowed to dive through the woods and have a great time on the beach along with the family again.  We think that she has displayed a very convincing phantom pregnancy, well she had us all fooled.

It has been quite a quite few weeks, as we were planning on keeping things relatively relaxed in the run up to expected puppies.  The dogs just enjoying spending time with us all at home and enjoying their walks.  The weather has been quite hot here, so walks have been adjusted to fit in with cooler times of day.  Some days have just been pottering around outside along with us doing some outdoor jobs.

Hope everyone is making the most of the good weather.
Posted by Seahaven at 10:19 No comments:

Cooper Does it Again!!!

Sunday saw us travel to Malvern for the Three Counties Champ Show, Trio has a great day being spoilt by the boys at home and didn't seem to bothered at not jumping into the car.

Thankfully not too early a start for us as neither breed was scheduled to be first in the ring, so a good relaxed drive for a change.  We arrived in good time to be greeted by our good friend Jan who had already finished with her breed (Field Spaniel), who had just been awarded the Reserve CC with Ianto.  So thrilled for her and this lovely boy.

We still had a long wait though as some of the judging was rather slow, and both breeds ended up in the ring at the same time.  I must have looked a bit odd trying to stack Maddie and look through the ring to see the girls with the tollers two rings down.

Maddie was entered in Open bitch and gained a very creditable 3rd to two champion girls, she then went into the Veteran Stakes and had a 4th in another strong mixed class.  Still can't believe that this lovely girls is a veteran, she certainly doesn't look or act it.
Tollers started as usual with the boys, Cooper in Post Grad, which he won!  He was then back in at the end of the dog judging for the challenge to gain his second Best Dog award at a champs show.  The girls then had there turn with Eve gaining a 3rd in Junior and a 2nd in Post Grad, showing well again with Eleanor.  Tasha then took Tilly into Open and gained a 2nd, glad to see that she finally has some coat on her!


Best dog and best bitch then came back in for the Best of Breed, again Cooper showed really well for Dawn and gained his 2nd Best of Breed at a champ show.  Not quite three years old yet, but maturing so well.  So very proud of this lovely boy and Dawn & Gerald for all of the hard work that they have put into him. 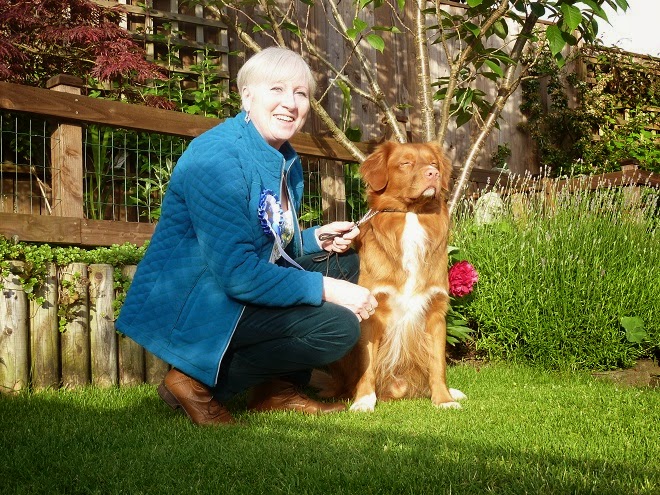 Finally managed to get the caravan out for a show!  We took the girls along with Maddie and Tilly down to Monmouth for the Wye Valley Agility show for the weekend.  This is the usual weekend for the LM Champ Show, one of our favourite shows of the year.  We did make the difficult decision to not enter this year as it was so far to go with only one dog who could enter.  We have decided not to take Trio out to any more shows and to give her a well earned rest prior to the arrival of puppies at the end of the month.  Wow, the end of the month - not too long to go now.

As it was the school holidays we were able to leave home at lunch time with the aim of arriving around 3.00pm, the earliest we were able to arrive to make the most of the time away.  We had a terrible journey and left glorious sunshine to be met with heavy rain showers, not what we expected.  We finally arrived and found a very wet field (we had been warned that the ground conditions weren't too good) and tried hard to find a spot that wasn't too boggy.  After one failed attempt at a suitable spot, my reversing does need to improve we managed to find somewhere suitable.  Quickly set up and spent the evening in some good company, friends who were also staying over.

Saturday started with a little mist and the promise of a bright day, it was quite warm but not burning sunshine which was perfect for agility.  Maddie managed two clear unplaced clear rounds in the agility but wasn't running as well as normal.  Tilly ran quite well with Tasha and picked up a few faults in each of her classes.  Julie visited with Uma (Trio's sister) and it was so lovely to see her with her mum Maddie.  She is such a lovely girl and has Maddie's lovely fun personality, love her loads.

We also took the opportunity to visit Ruth with Fae (Maddie's daughter from her mating with Darcy) whilst we were in the area.  She has grown up so much since we last saw her, maturing beautifully, another lovely girl.


On Sunday we woke to bright glorious sunshine and had some early runs and no clear rounds for any of us.  Maddie still wasn't quite right, but nothing obviously wrong and only a few faults picked up.  Tilly on the other hand would have rather sun bathed as she wasn't interested in doing agility at all.  Not even for a new rabbit skin tuggy toy!!

We managed attend the SMART clinic with both of the dogs, as they were running a clinic at the show.  Really pleased that we managed to with Maddie not being 100% right.  She was found to have some heat in one of her hocks, but with no lameness or pain evident something they were surprised about.  She also had some tightness in her back, which could be connected or it might not.  She has a list of treatments to be carried out each day for the next few weeks and we hope that she'll be back to full fitness again.  Tilly on the other hand was given a A1, no excuses now Tilly for not getting clear rounds at agility!!

With the good weather the ground had dried up and we had no problems at all getting out, thankfully.
Posted by Seahaven at 19:39 No comments: