So tired I can barely type this. Mam woke me up 5.30am - not a happy Toller. We were booked into Mid Western Gundog Show at Worcester. It was so early I refused to eat my breakfast.

My usual toilet stop at Neath Canal - which took a lot longer than normal because I hadn't eaten, then back in the cage for a long journey. Not a bad venue at all - a Leisure Centre but stacks of free parking and acres of fields that I wasn't allowed on but only because I've got white paws and it was muddy. The bacon butties weren't a patch on those in the Toller Club Show though - but I'm up there in March so don't have to wait too long.

Judging delayed for 15 minutes but tollers were first in. Dad went out - I went in. Dad came back in as I came out - with a red rosette! First in Post Graduate. So Dad had to go again - good job it hadn't started raining. So into Best of Breed against Open winner - the Junior winner wasn't eligible because he'd entered PG as well and came second to me. Unbelievably good day - judge must have liked me because I got BoB. Both Mam and Dad were very pleased I'd behaved myself.

We then hung around until mid-afternoon for Best in Show. Up against 26 others here - it was too big a task. I was bombed out in the first whittling down - judge pulled 7 out - 19 other dogs skulked out of the ring, tail between their legs after hanging around all day just to be told - you're not good enough!

Lovely day though apart from Dad having a row with the Sat-Nav in Worcester. He reckons it tells lies so Dad hit it off the windscreen. Now it won't turn itself off - serves him right! 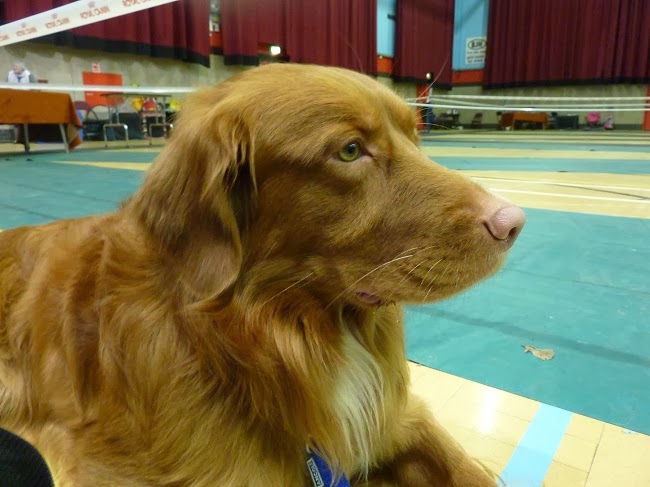 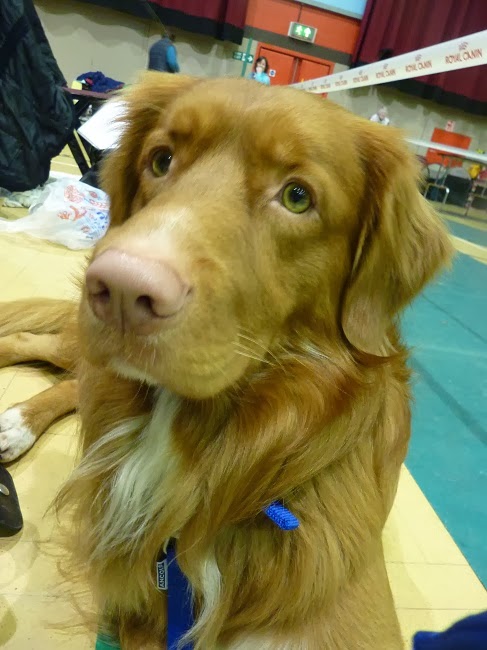 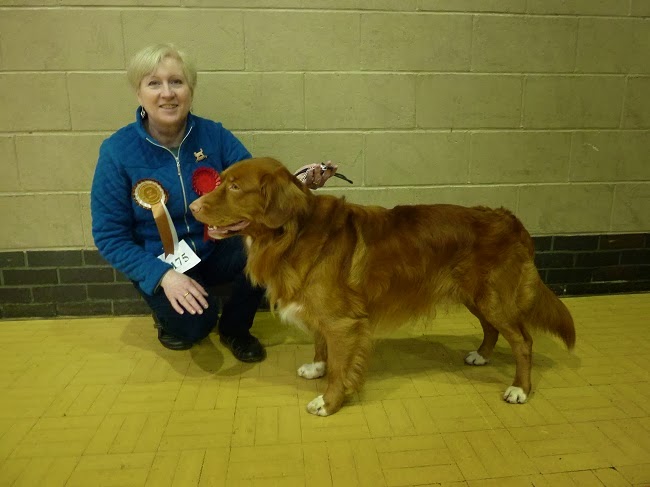 The first of three busy weekends with Welsh Junior of the Year held at the Royal Welsh Showground today.

Again the Welsh KC gave this event a real sense of occasion, the rings beautifully laid out and three very well respected judges for the event.  Marina Scott, renowned former junior handler & author for the handling, Lee Cox and Andrew Brace for the Welsh Junior, judged in two parts.


The handling was first on with the younger age group first in the ring, beginning with a parade of handlers and dogs with some commentary on each pair taking part. Handlers have to go in number order and with both girls being early in the alphabet were first in the ring for both age categories.

Eleanor did a fantastic job with Eve, who was quite a fidget in the ring, not too surprising as she hasn't been out to a show since LKA and these babies do forget things quite easily.  Eleanor managed to keep her cool and dealt with her confidently and patiently which paid off with a 2nd in her class.

After another parade of the older age class Tasha was in the ring with Trio.  It was lovely to see these to back together again after such a long break, and we really didn't know what to expect of Trio at all after her time up.  Well she didn't let Tasha down and went really well in a strong class sadly not placed but so pleased with how she looked in the ring.


We also supported our friend Jan who had qualified Eve's friend Ianto, who was sadly knocked out in the second round but looked fabulous.  He's hoping to qualify again for next years competition, as is Eve.  Eve will go in to Junior classes now, so hoping that she'll have a place at this prestigious event next year.

We had a delicious lunch and watched the other Junior dogs competing and we all applauded the lovely bearded collie that won.


Our raffle was drawn with the winning ticket being number 98, a work colleague of mine who will have the hamper delivered to her this coming week!

Someone gave me this video yesterday of Rookie's first show, also featuring brother Morry! They were 6 months old here, Rookie placed first and Morry second. The best bit is watching them trying to keep still for the critique!

So funny watching it back as I have no recollection of what the judge was saying to me and can see how confused I was! Excuse the terrible handling- cringey but hopefully this means I've learnt a lot since....

And some pics just cause! 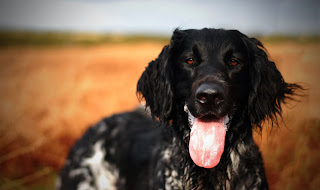 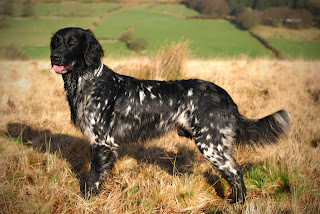 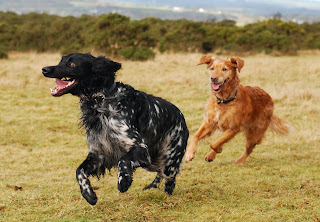 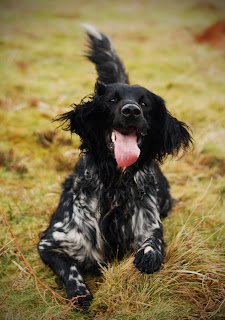 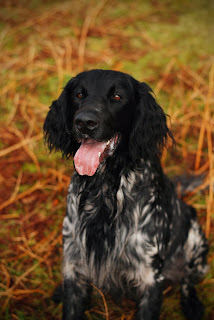 Starting to Get Busy!

Well the weather has continued to be awful, but today we had a rare glimpse of the sun!  So we made the most of it, and being a weekend all managed to get out together so headed to the beach.  It was rather busy as everyone else thought that they would also enjoy the sunshine, but we had a glorious walk on Newport Sands.

It has been a busy weekend though and we know that getting out together over the next month will be difficult with three big events on the horizon.  Welsh Junior, OJACs and then Crufts.

Saturday say the final training session for the Welsh junior agility team before OJAC in two weeks, the girls and dogs worked their socks off during the three hour training session.  They have a few exercises that were new to them that they will work on over the next week but the session filled them with a lot of confidence and they're looking forward to the event enormously.

Fundraising for the OJAC has been going well, a cake sale is planed for next week for school and tickets for the raffle have been selling well.  Just the final push now as the raffle will be drawn next weekend at Welsh Junior.

Posted by Seahaven at 21:01 No comments:

Well 2014 has been quite a year so far with the wet and windy weather, I really can't quite remember a year like it and we still have some time to go until we see the end of winter and beginning of spring.

The ground is still saturated, and has stopped any new years resolutions of practice in the garden, however we did bring the weaves up to the front drive to see if we could manage a bit of practice.  They have been in the garage for 3 weeks now and we've managed to have them out twice!  Due to school, weather and dark evenings haven't had too much use but the nights are starting to lengthen so hope isn't lost yet.

I'd been asked a few times about having a meet, but with live being so busy at the moment and no guarantee of dry weather I'd been reluctant to organise anything.  However persistence did pay off from some quarters and a meet was organised for last Friday at Newgale.  Newgale has been in the news recently due to the road being closed due to the weather and a stranded bus! After Wales taking another battering from the weather the road was duly closed again after last weekend, so an alternative venue had to be sought.  So it was arranged to meet at Wolfcastle and walk on the Sealyham estate, a favourite walk for our dogs but very muddy and difficult terrain which didn't suit everyone.  Thursday evening saw Newgale been opened again so we reverted to plan A!

So we had a very windy, but dry walk on the beach which looked quite different to when we last had a meet here in the autumn.  The dogs had a great time, even some extreme swimming!  It was great to catch up with everyone and after the dogs had been dried and tucked up in the vehicles we headed to the cafe for a hot drink and a proper catch up. 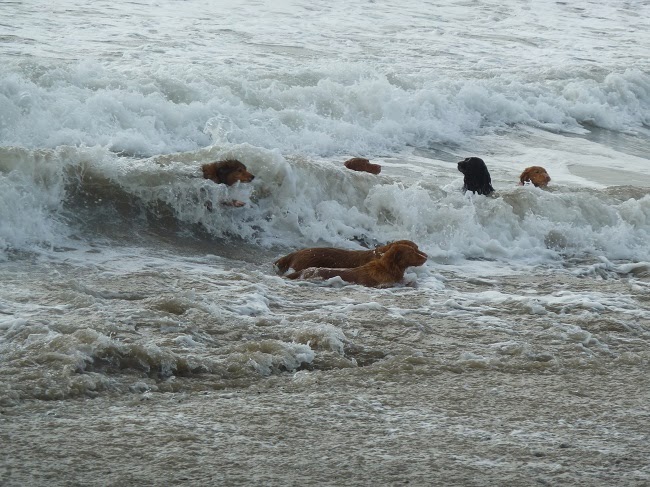 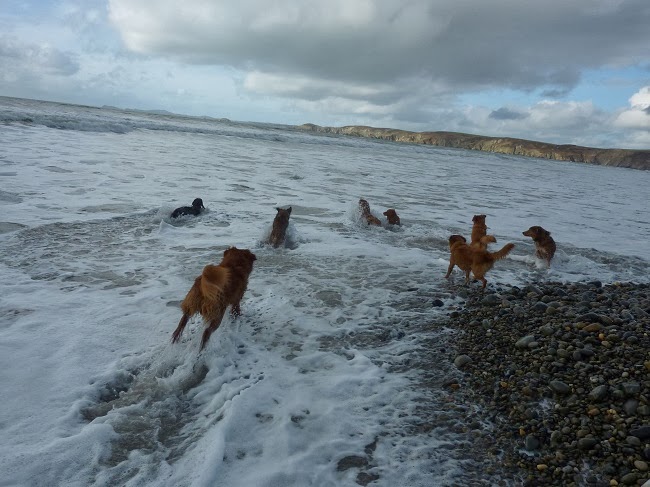 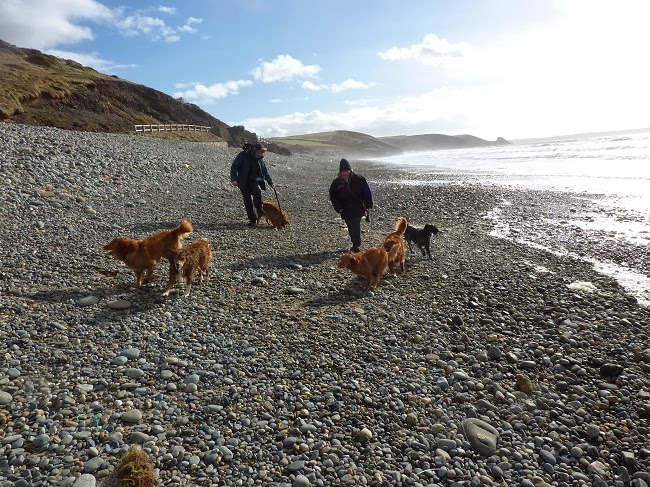 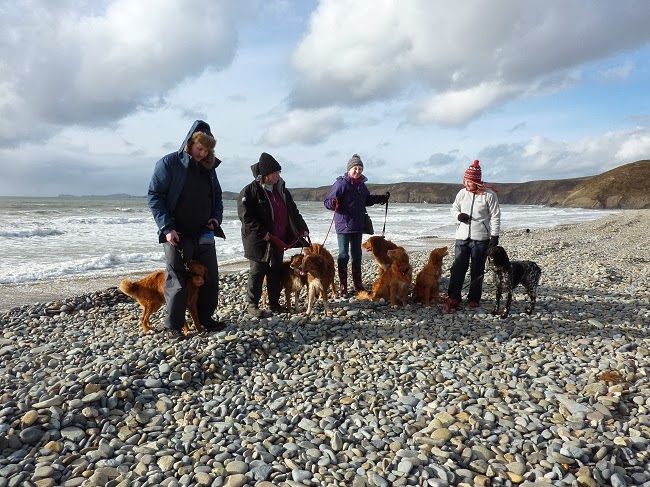 Thank you all for taking the trouble of coming down to me, I really appreciated it and you know that you're all welcome anytime.

News from this weekend;

Cooper had a 3rd in a large AVNSC class at Neath on Saturday with Dawn.
Megane has a 2nd in another large AV gundog class at Salisbury and South Wilts show on Saturday.

Well done to all, looking forward to seeing lots of you at Crufts in a few weeks time!
Posted by Seahaven at 16:03 1 comment: