Bit of an update

I think that everyone is having to contend with the weather to some degree at the moment.  This constant wet does make it so difficult to do things, just taking the dogs out to the toilet is a major expedition especially with the tollers who don't like going out in the rain.  I would have thought that they might have got used to it, but sadly it isn't the case!  They have continued to enjoy their walks, jumping in muddy puddles and generally getting filthy.  We have had to watch them in the river though at times as it has continued to be in full flow and swollen for much of the month.  Newgale beach has been out of bounds due to the storms at the beginning of the month for a few weeks and we enjoyed our first visit there today.

Trio has been coming out with us for some walks with the other dogs and she has enjoyed being part of the pack again, although a frustrated one!  Today I decided to let her off the lead for the first time since her accident, I waited until the end of the walk and the others had got rid of the silliness so wouldn't encourage her.  She was delighted, bless her.  She had such a look of delight on her face and was reasonably sensible - or as sensible as a Munster can be!  Only five minutes, but a start.

It's been a quiet January, which has given us a chance to recharge our batteries.  We're now ready to head into February which is unusually busy for us before Crufts.  We have OJAC and Welsh Junior to look forward too before Crufts.  Now hoping that the weather might improve and we can get some practice in!

Happy 2nd Birthday to the Celtic Pups! Sorry a day late!
Cann't believe that Megane is two! where has the time gone!
Tuesday she enjoyed doing what all young ladys like to do - a spot of retail theraphy
We went to Scats and she had chats and biscuits with some of their staff! She had a great time having lots of fuss made of her and also she managed to buy some presents for yesterday!

These photos were taken yesterday and you can see she is looking beautiful!
Below is a photo of the little lady on the slide at Donna's ! 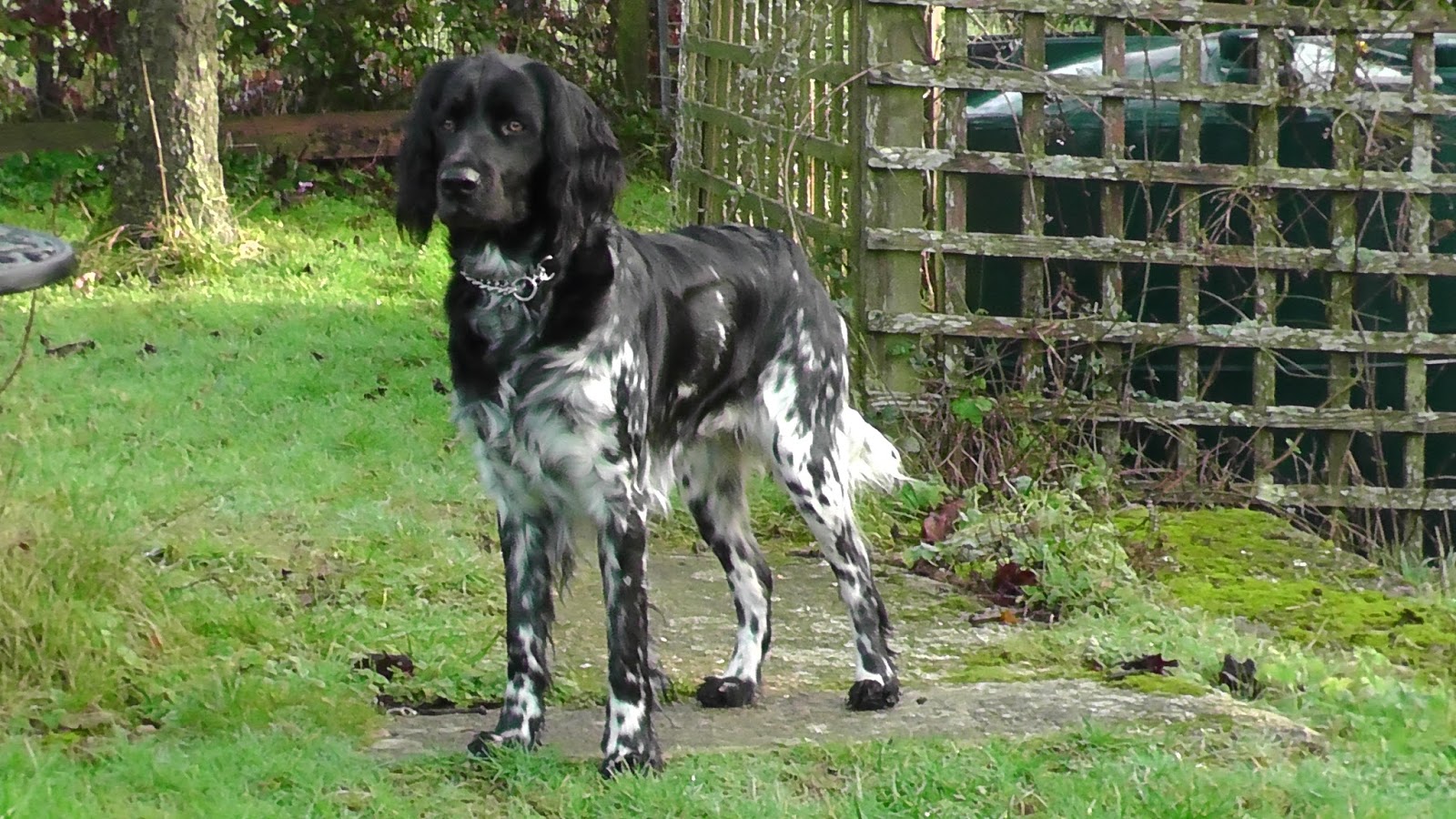 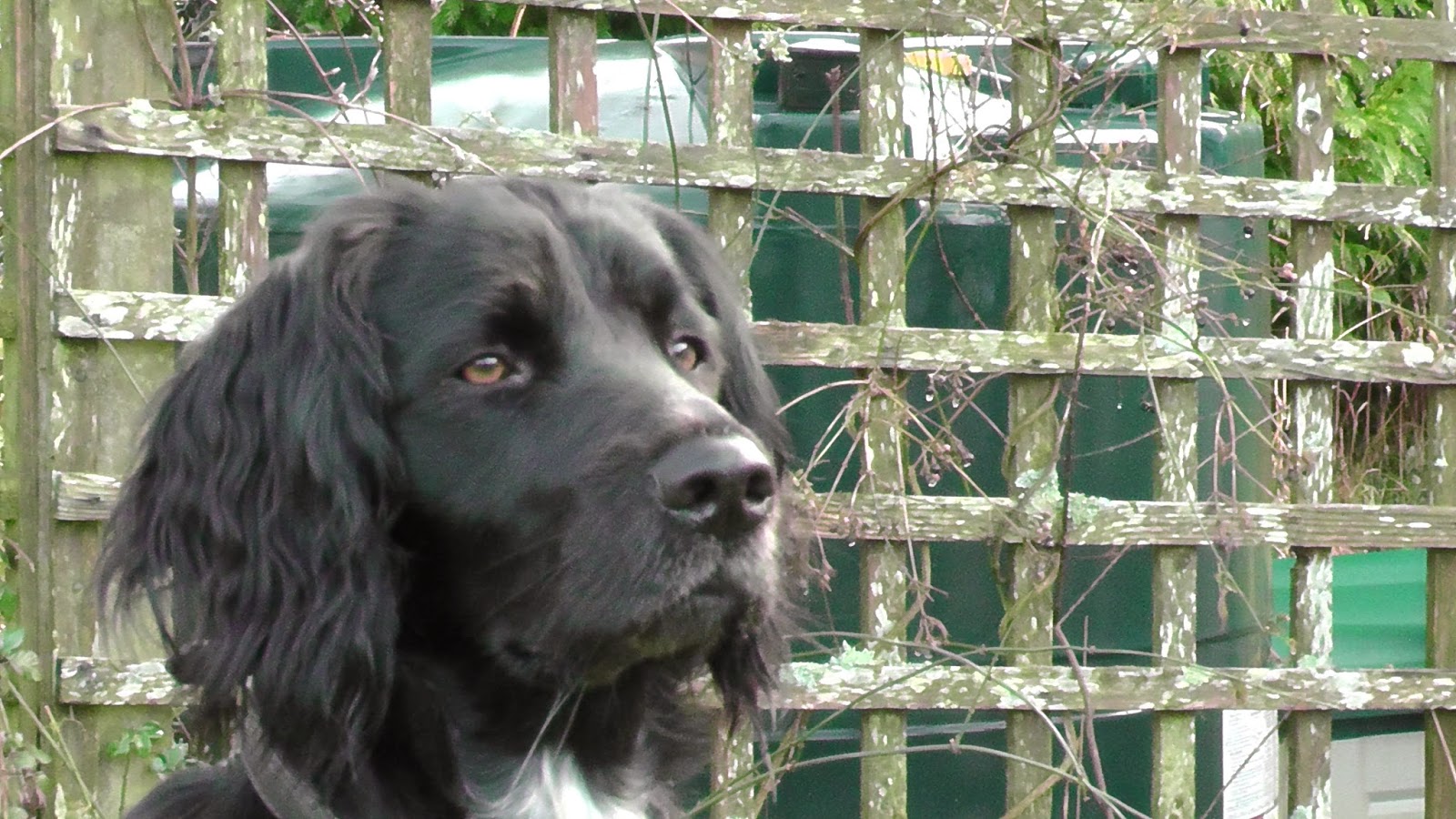 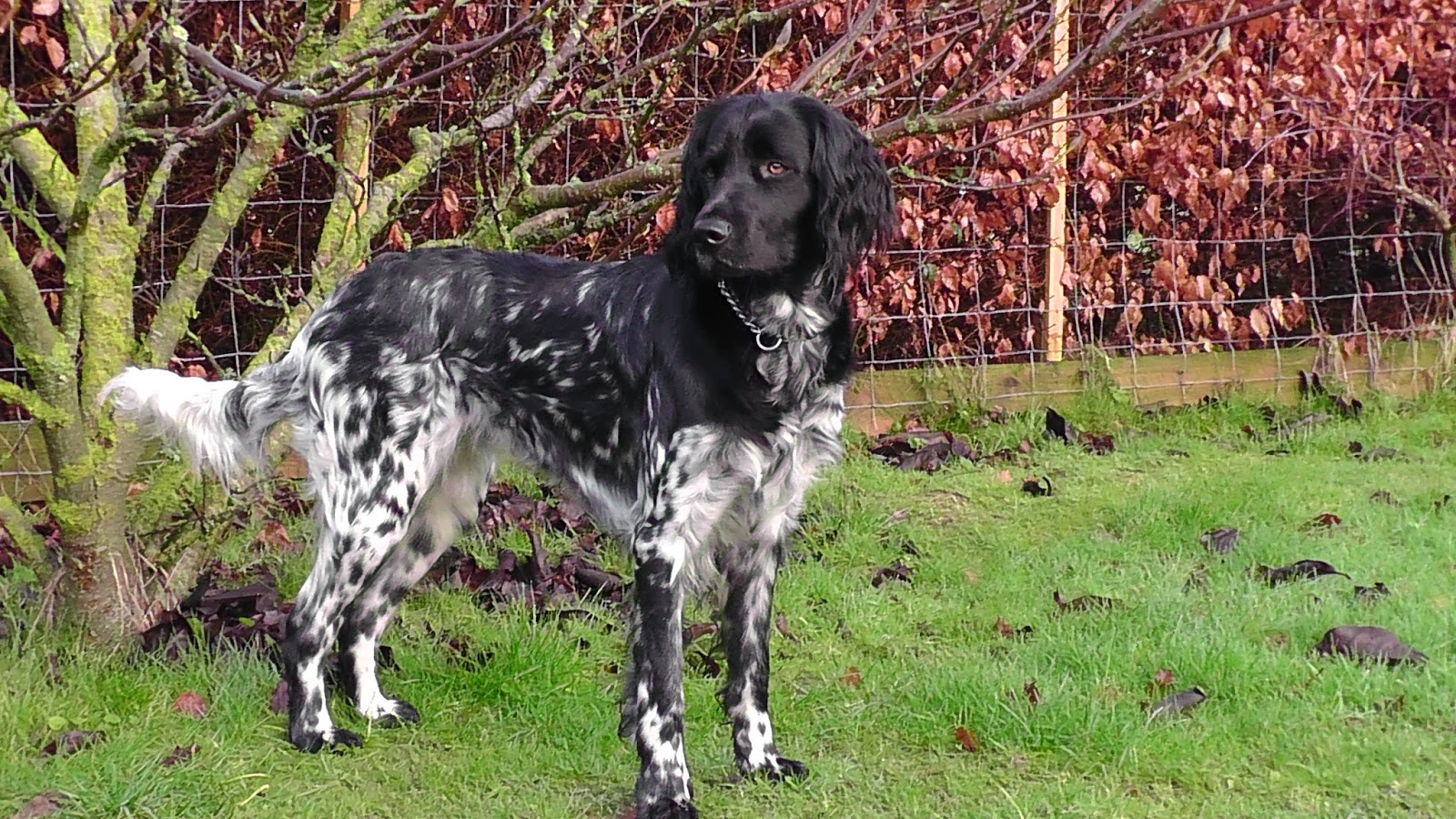 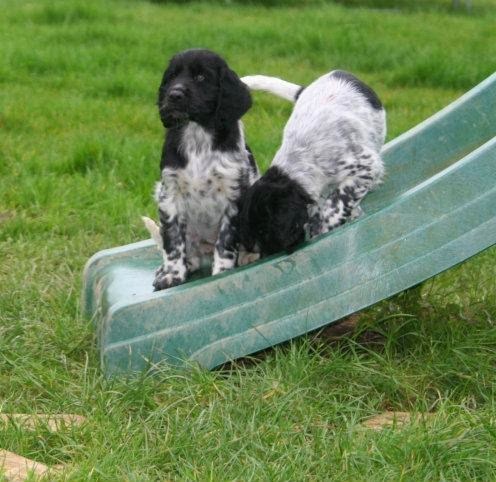 Megane also paid a visit to see mum and dad and to have some birthday treats ... 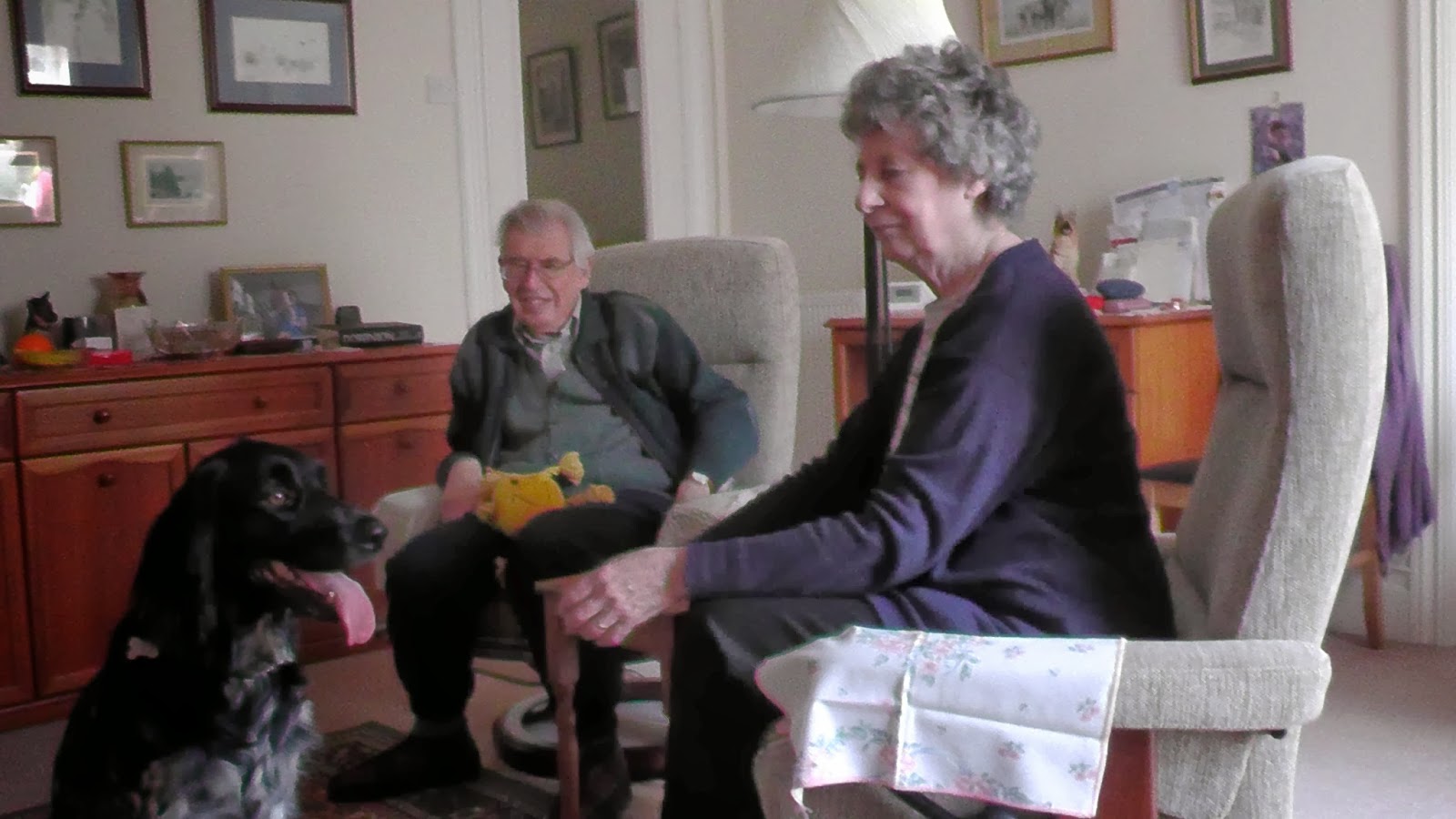 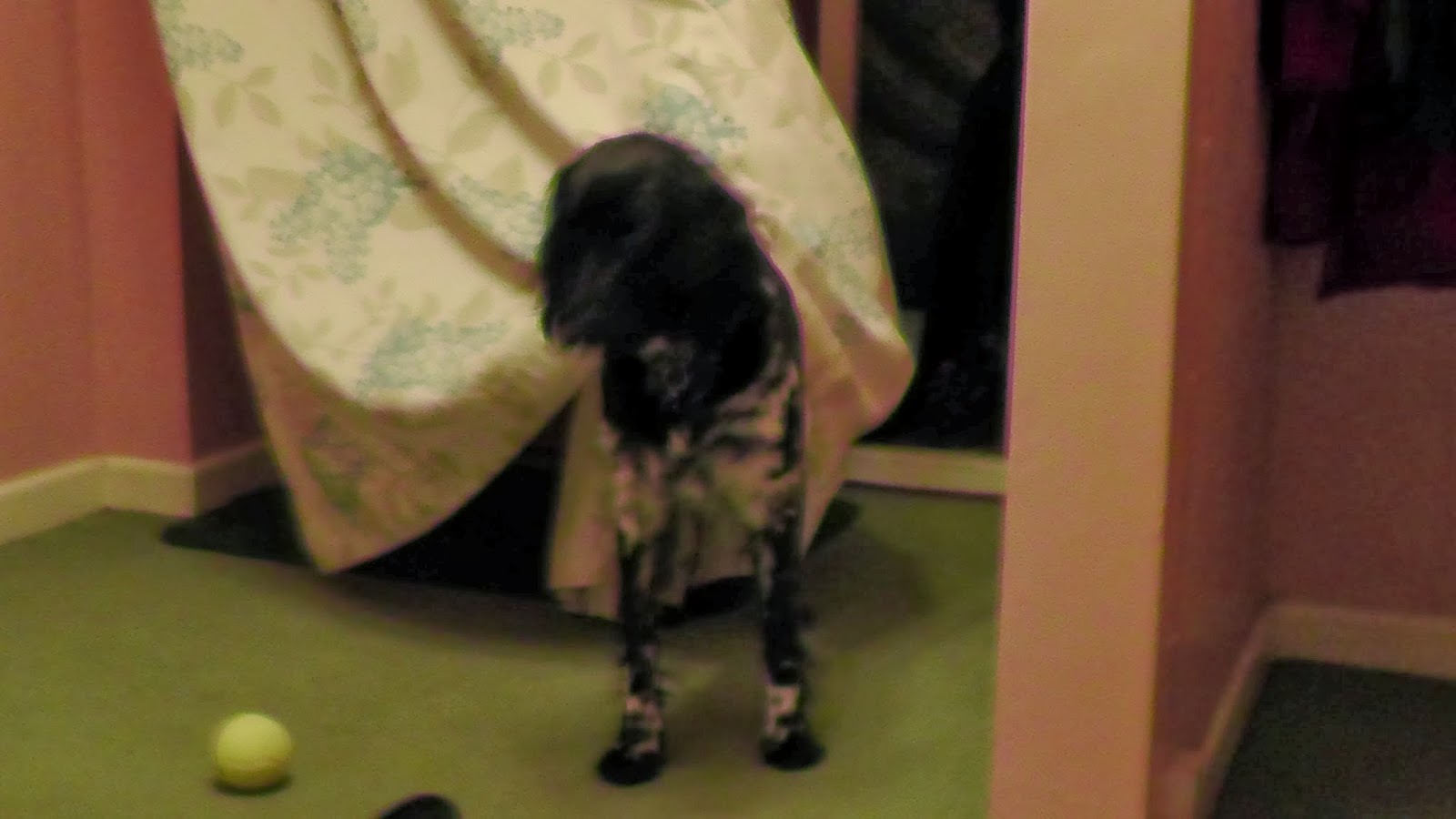 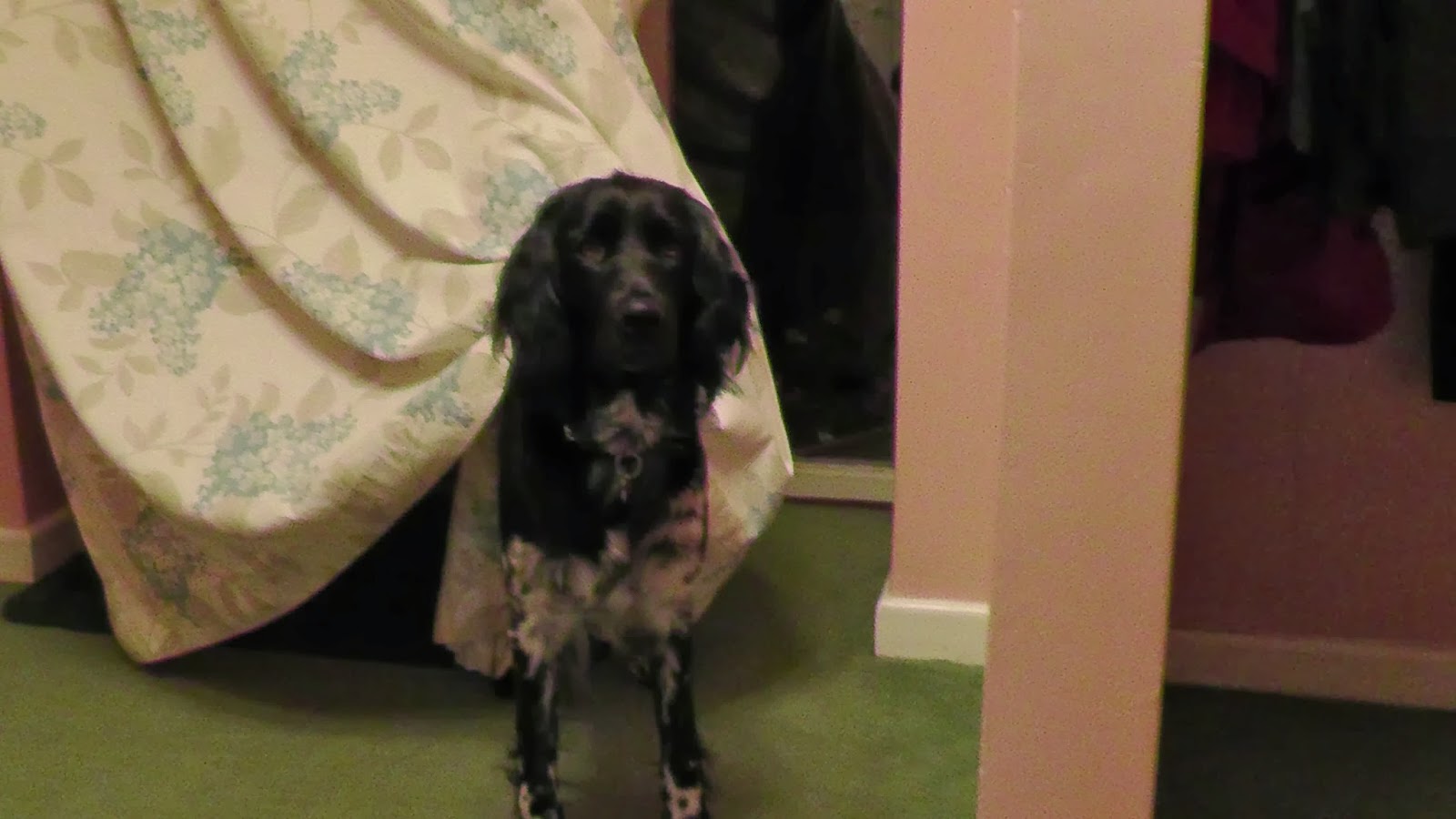 And as always the clown who gives us so much joy and laughter....
here doing her favourite trick of twirling the hall curtains round and around...
Thank you Donna and Sean Maddie and Darcy for giving us this beautiful girl.
Posted by Unknown at 19:12 4 comments:

Rookie has made it to two years old without causing serious injury to himself or others or gaining a criminal record!! Miracles do happen!

I really can’t believe where the time has gone. He has matured (physically....) so much. 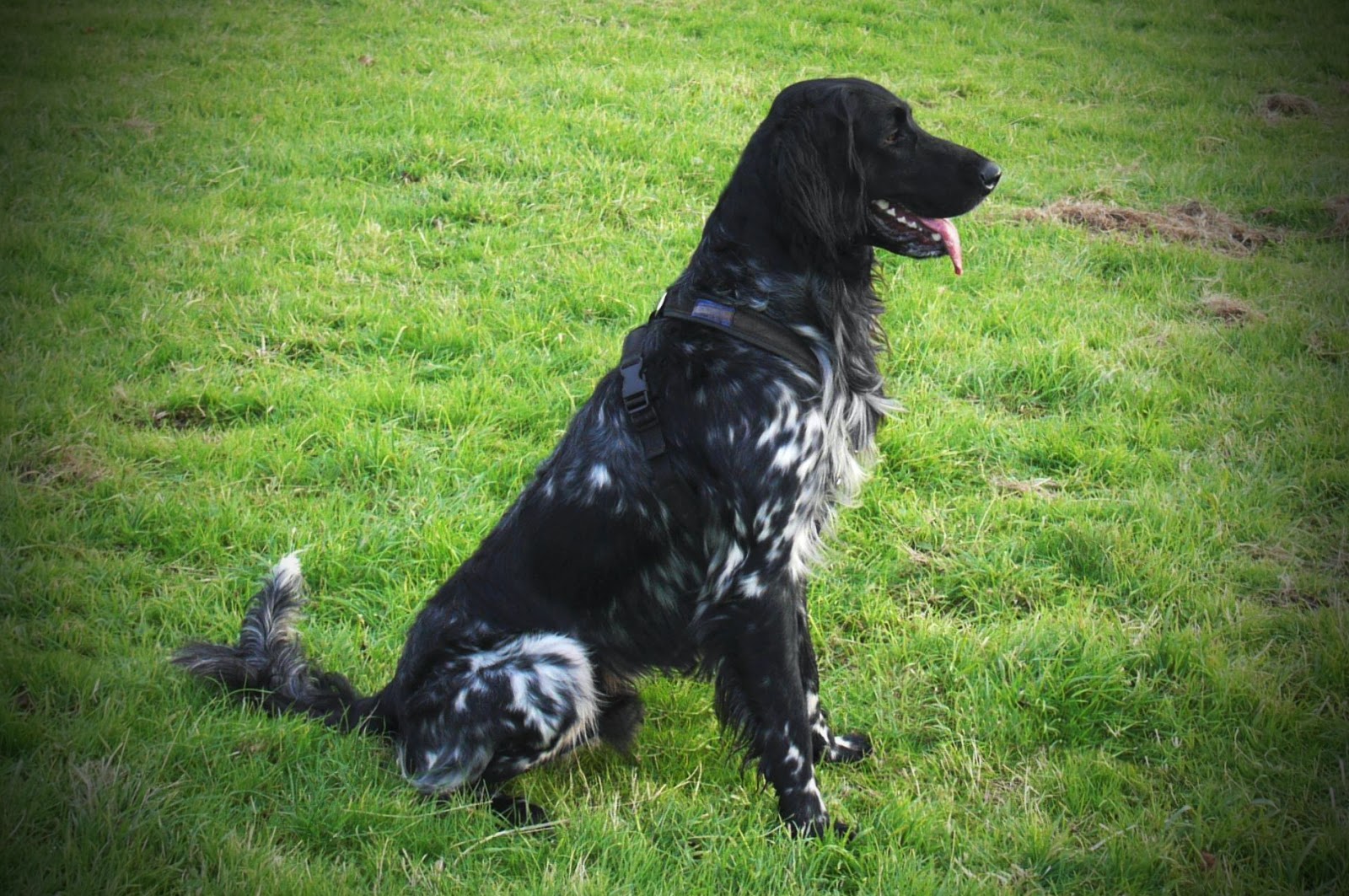 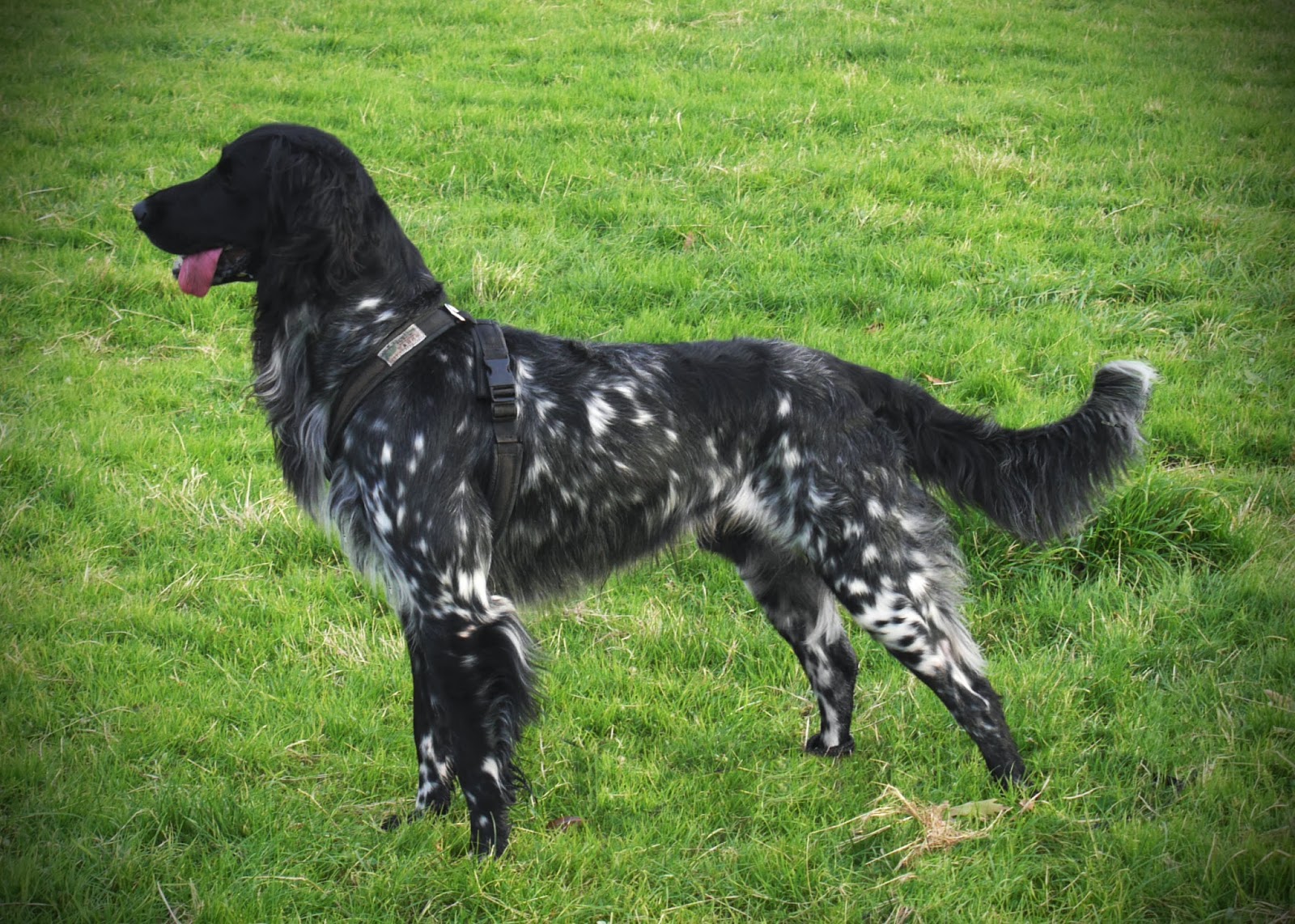 What a special boy grew from this lovely, squishy pup.... all started with this tempting photo... 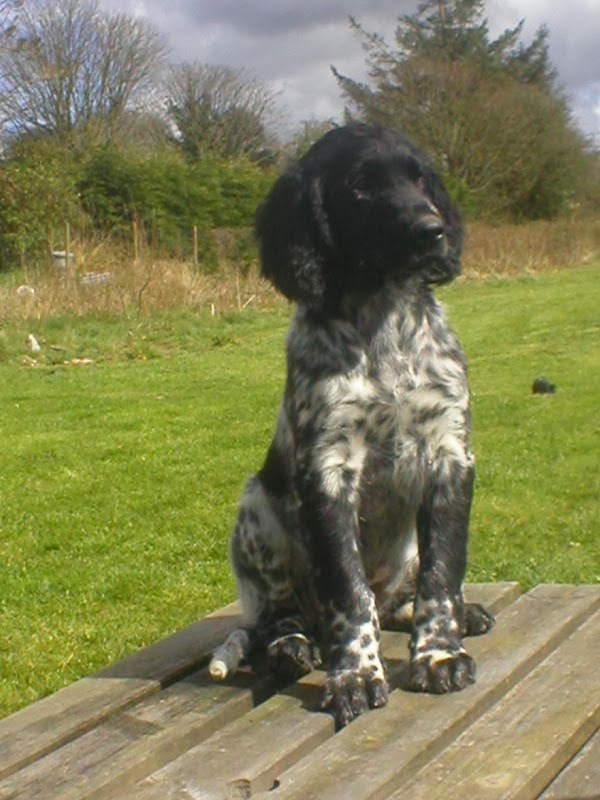 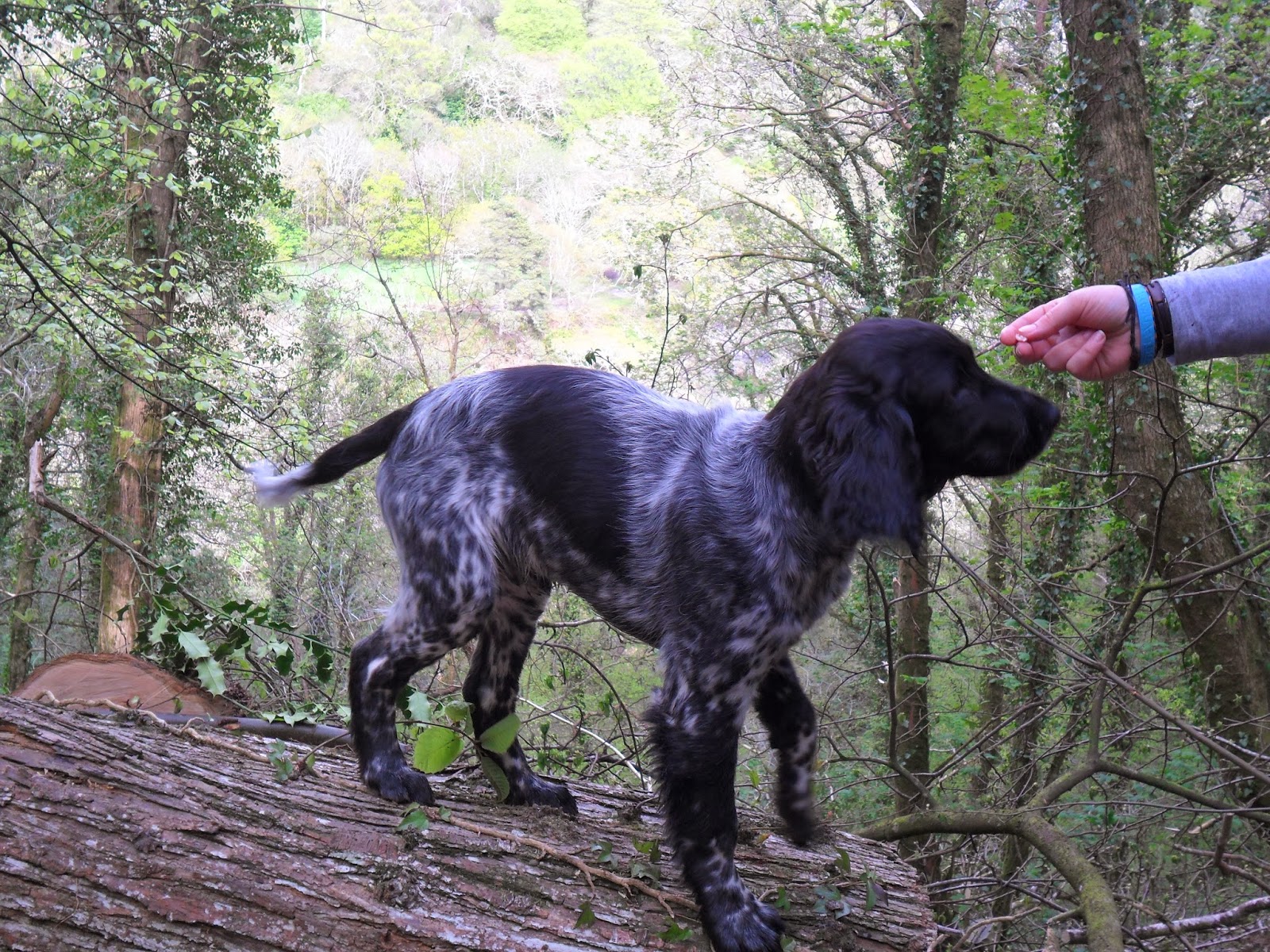 Then came puppy’s first point (at those pesky seagulls).... 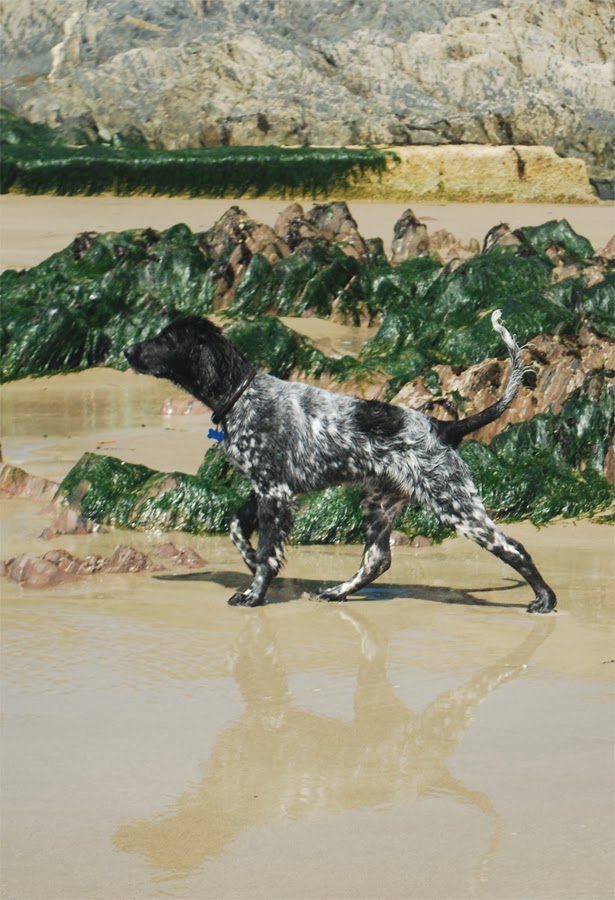 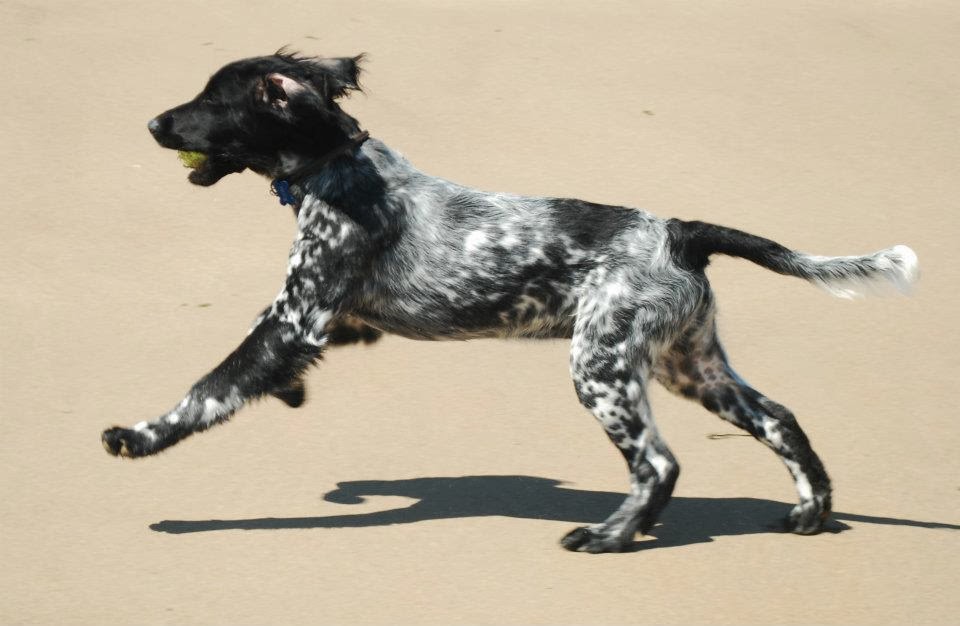 The cliff side lied to me that day, when I looked back through the photos and saw that little halo above your head...

Still it’s been lots of fun! How about your first girlfriend? 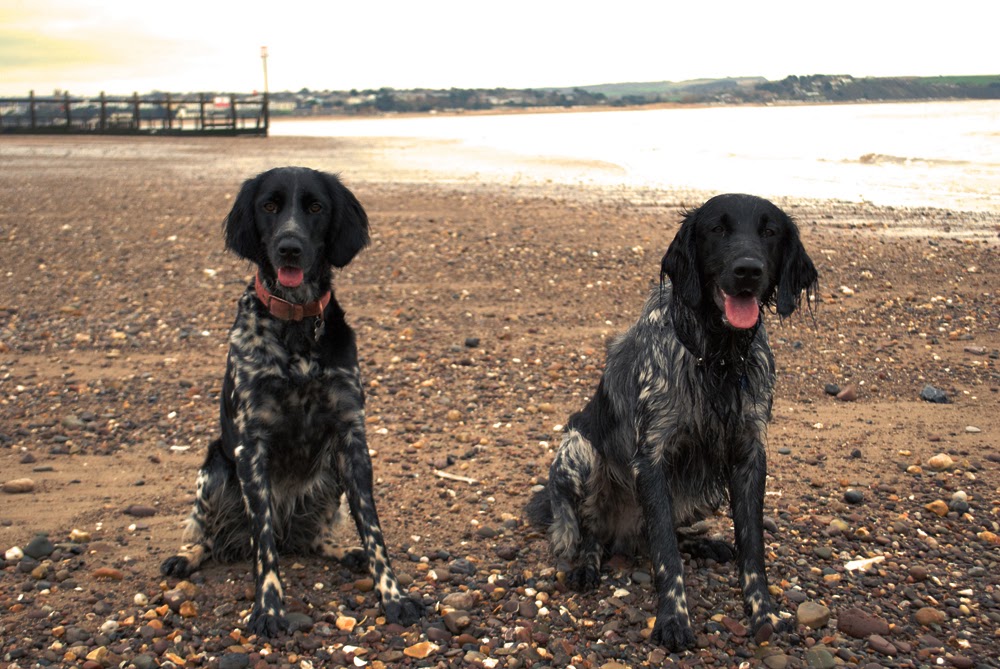 I’m afraid I would need a whole new blog to list the girls and boys who followed, but who’s counting?

Your first play in grass that was taller than you? 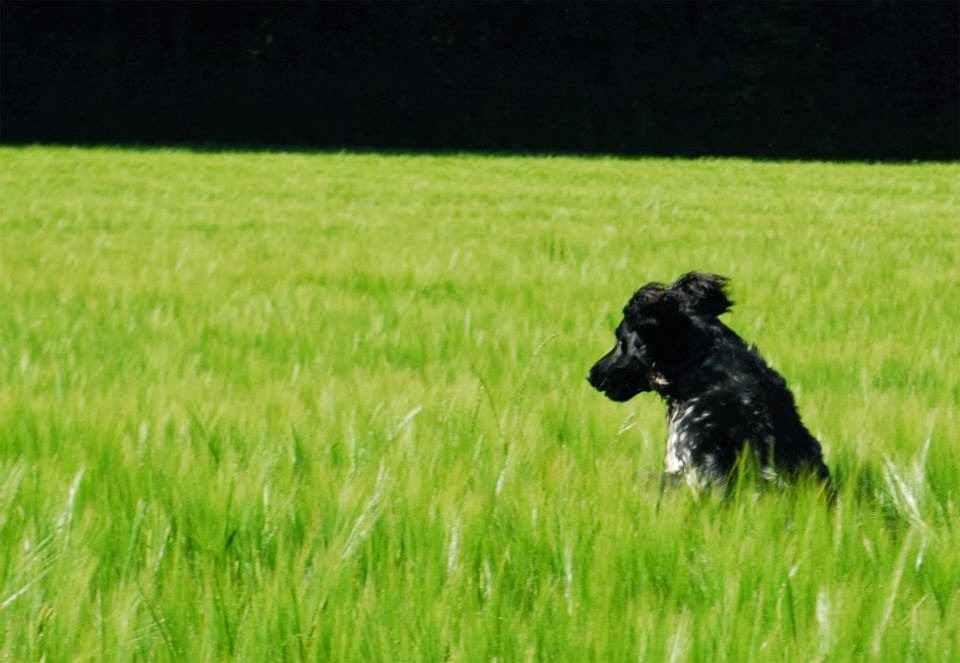 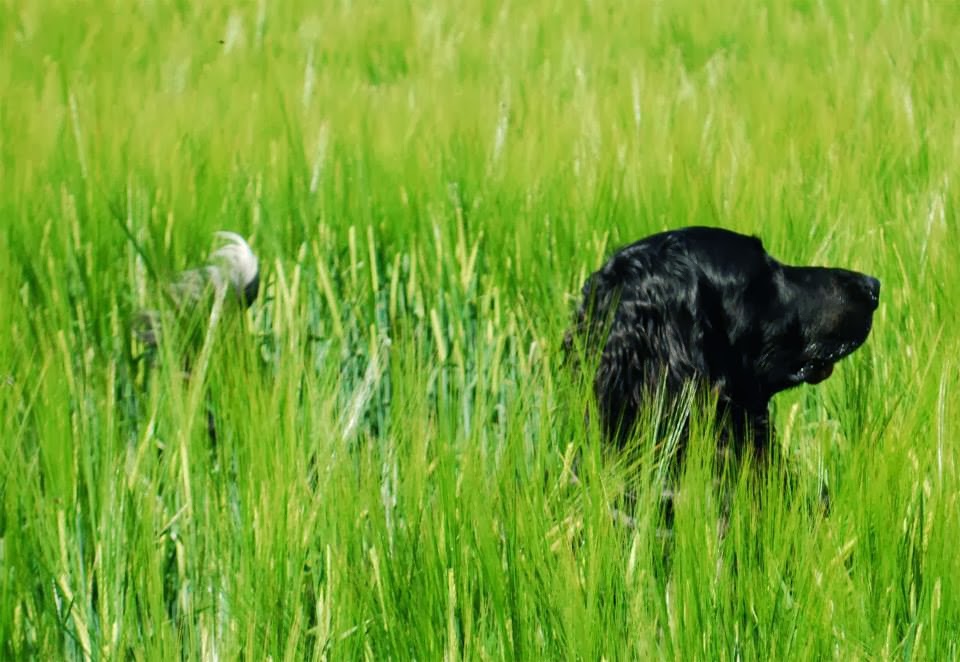 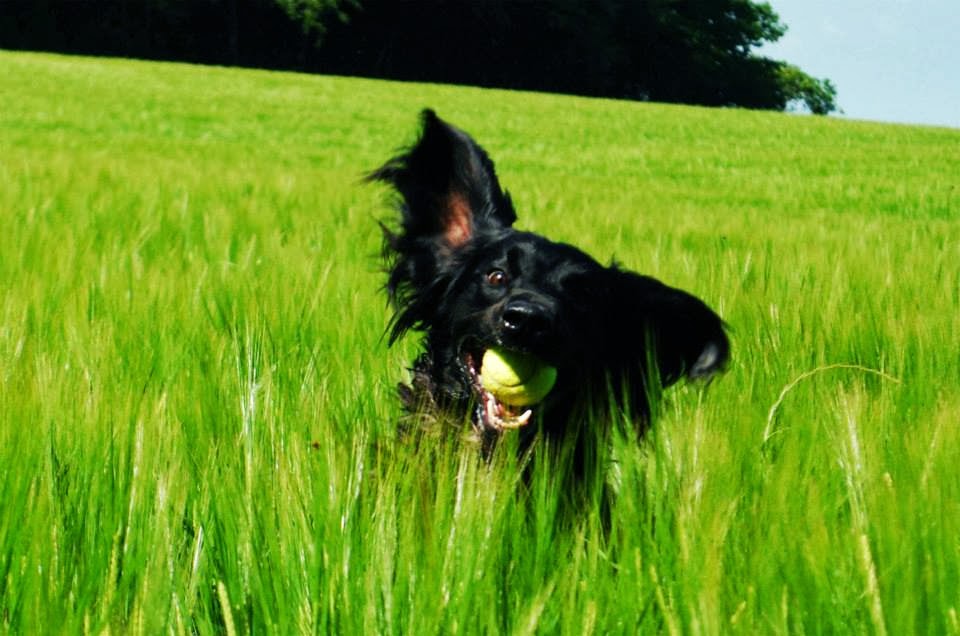 Your second beach trip when you pretended to be in Baywatch in front of that disinterested vizsla?

Your first trip to Crufts? 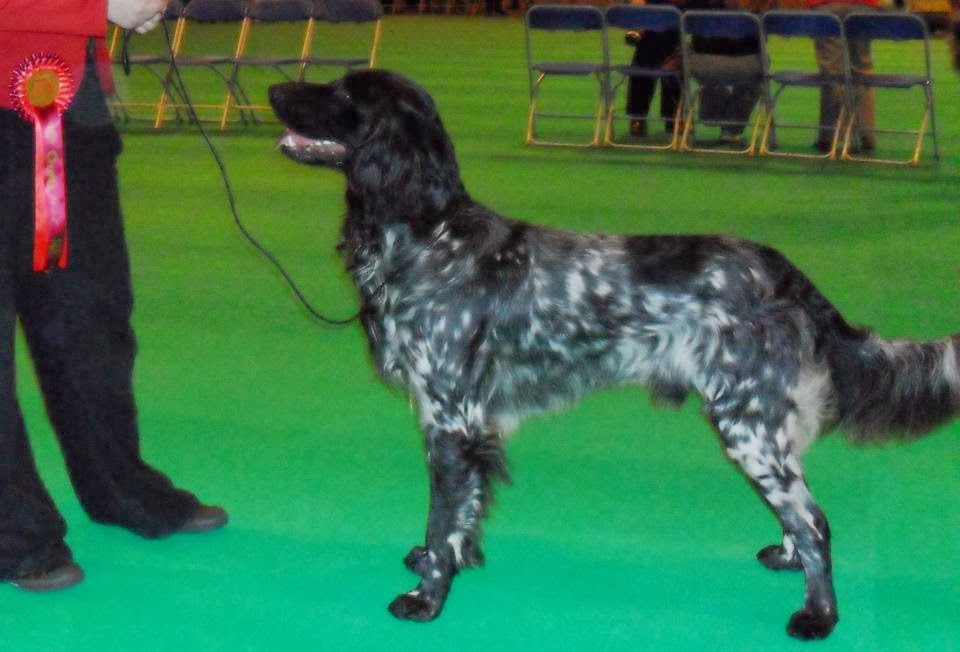 When did you suddenly turn from that awkward, lanky, clumsy puppy, to the gorgeous, sweet, funny oaf I have the pleasure of spending my days with? 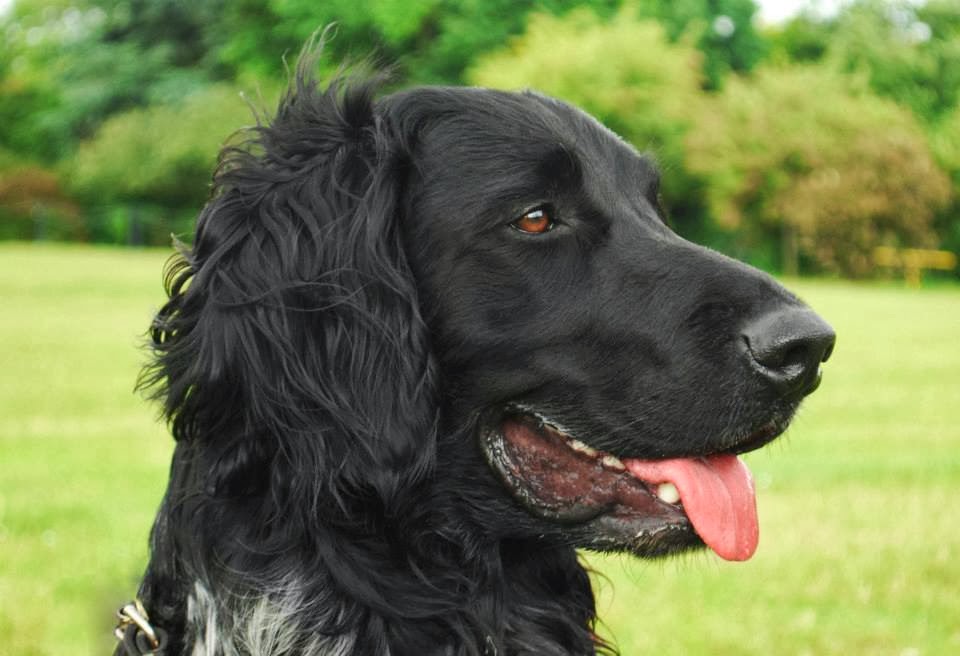 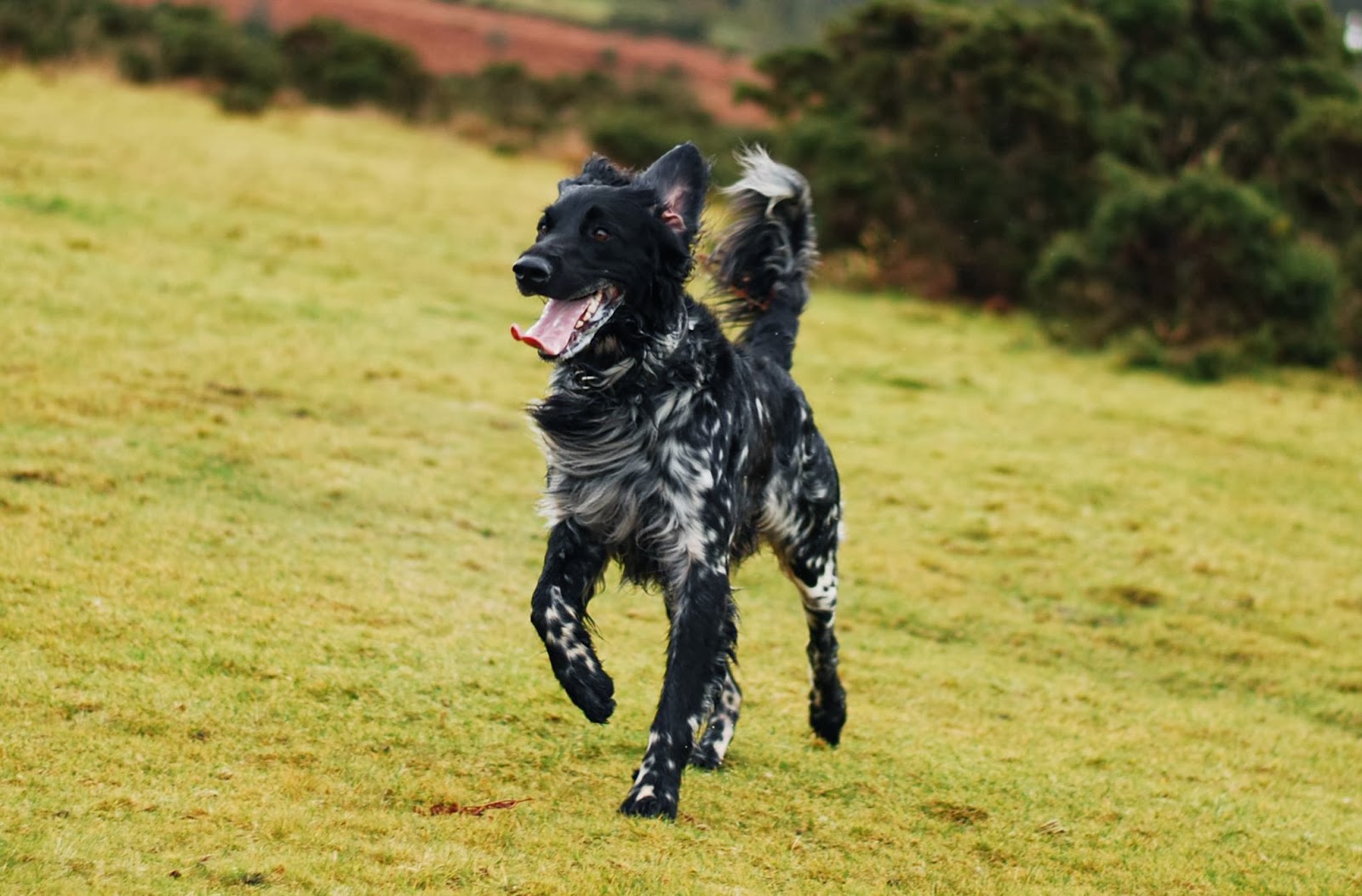 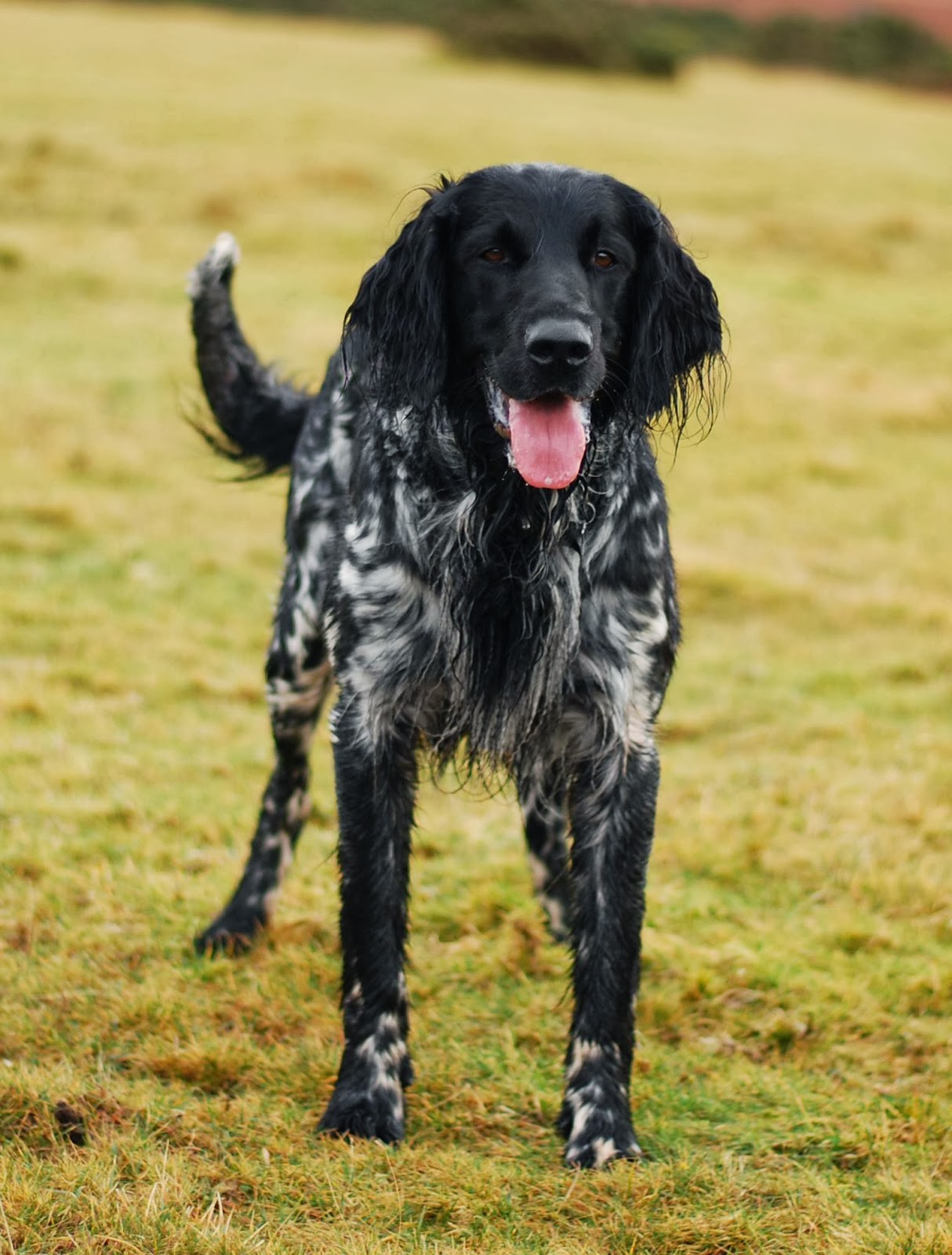 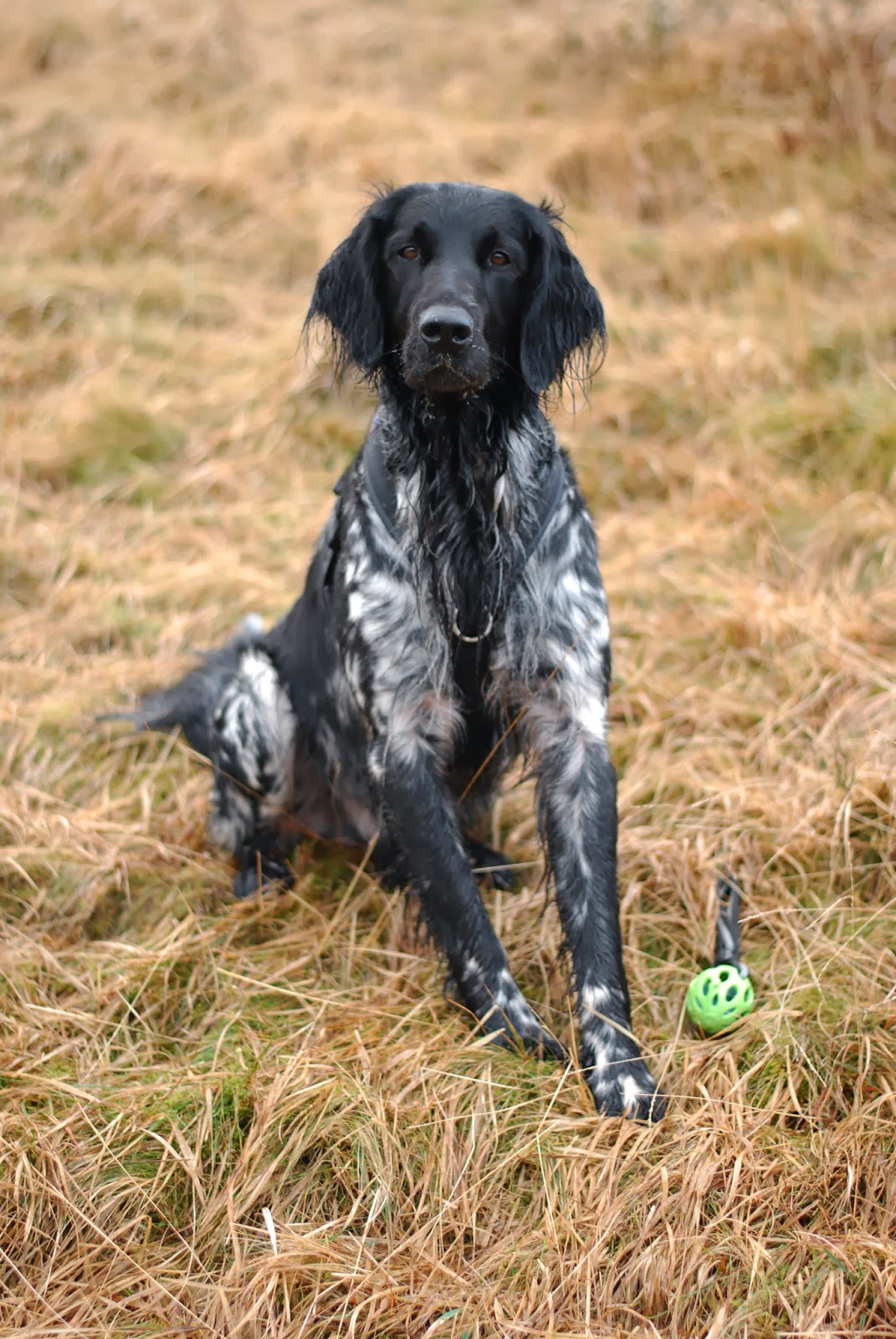 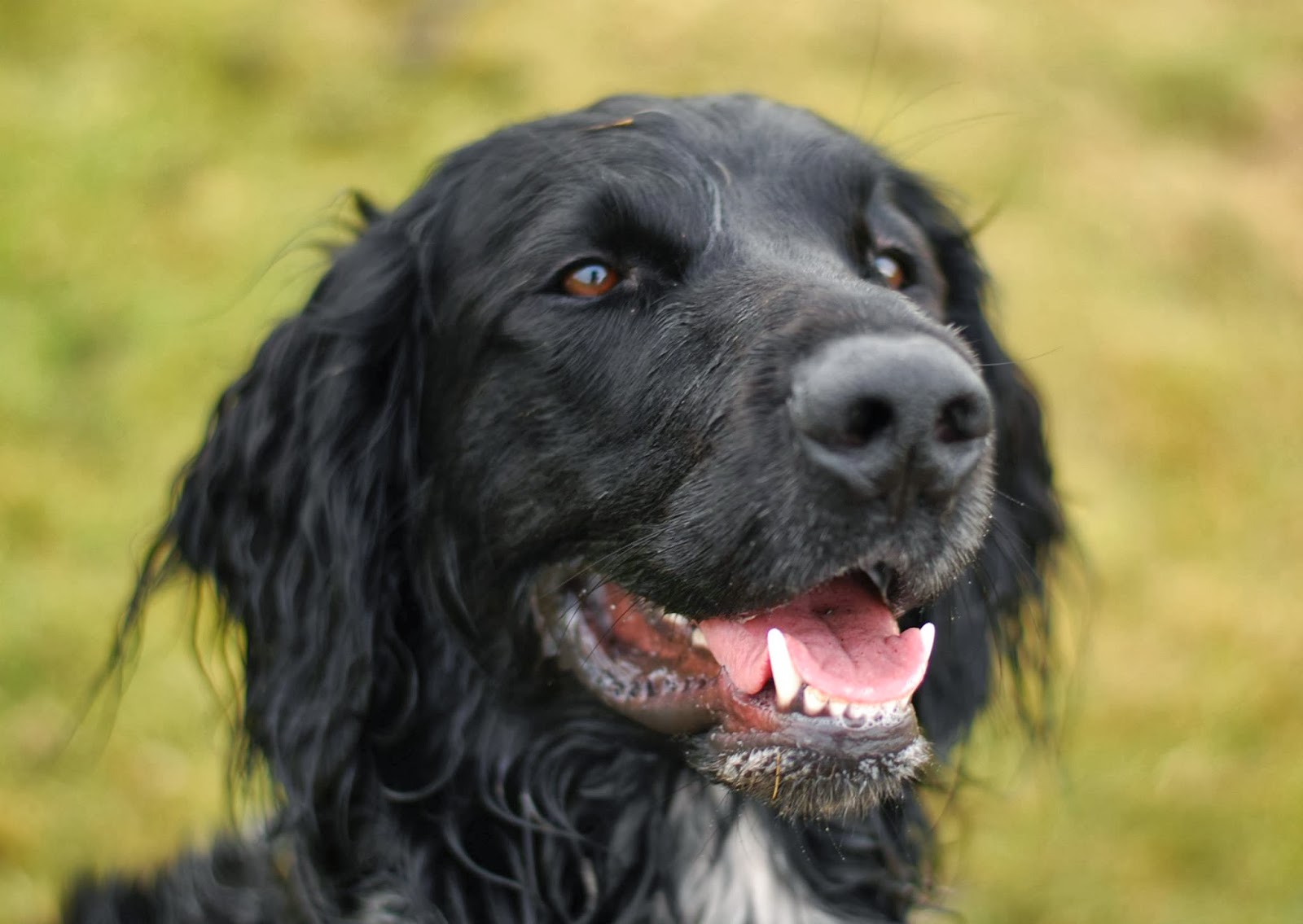 A loved member of the family... 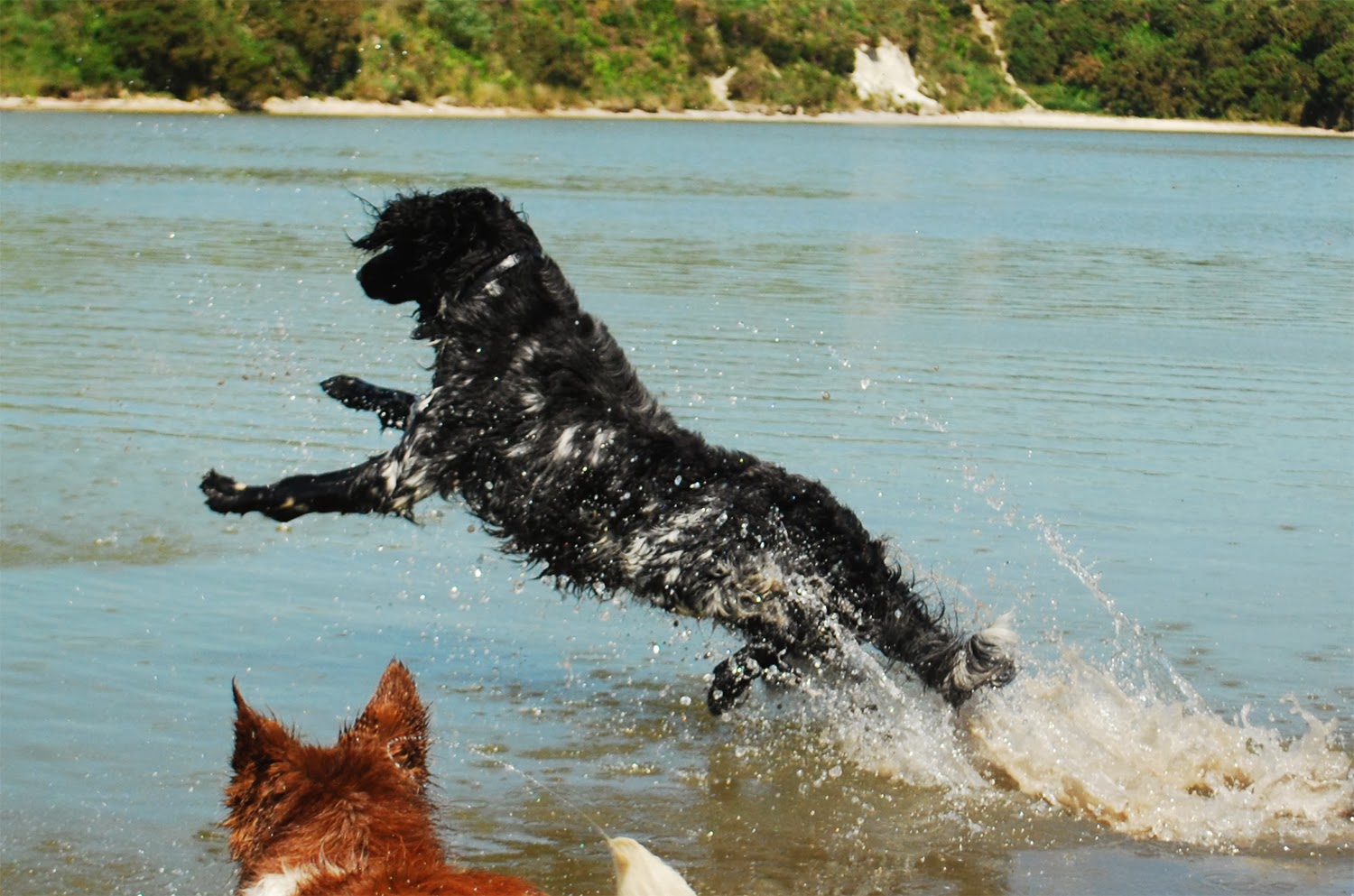 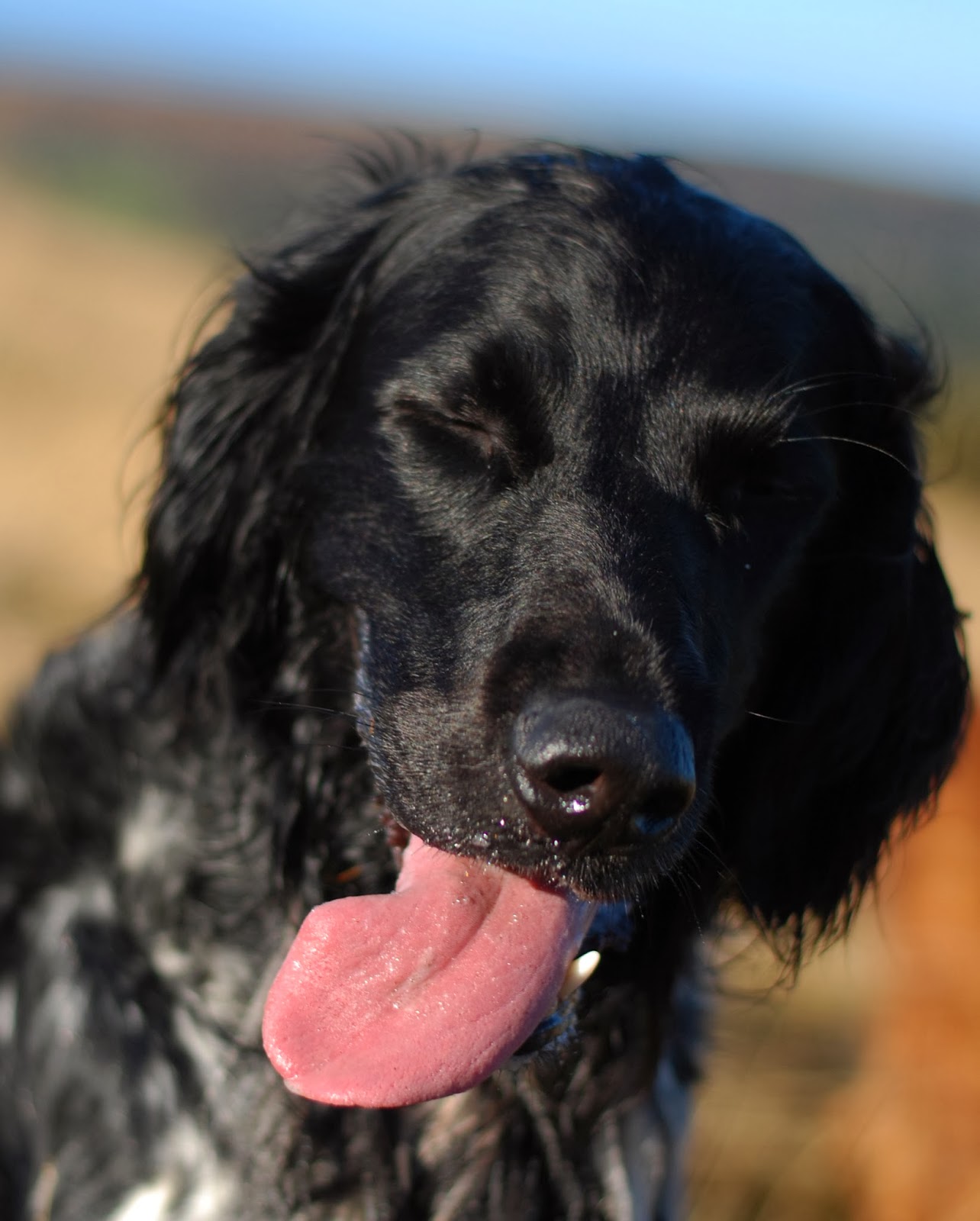 Wishing all of the Seahaven Celtic litter a very happy 2nd birthday.

My most sincere thanks to Donna and everyone involved for my very special boy. He is the life and soul of the party, but a big, cuddly teddy bear, with the most loving nature. He still keeps me on my toes with his antics, but not a day passes when he doesn’t make me laugh out loud, and I really couldn’t imagine life without him (would be far too quiet and leave me with too much time on my hands, probably). 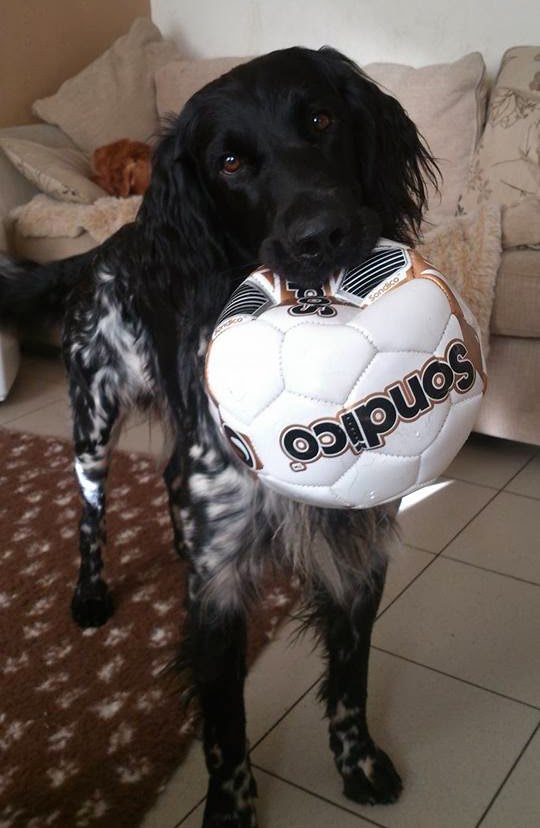 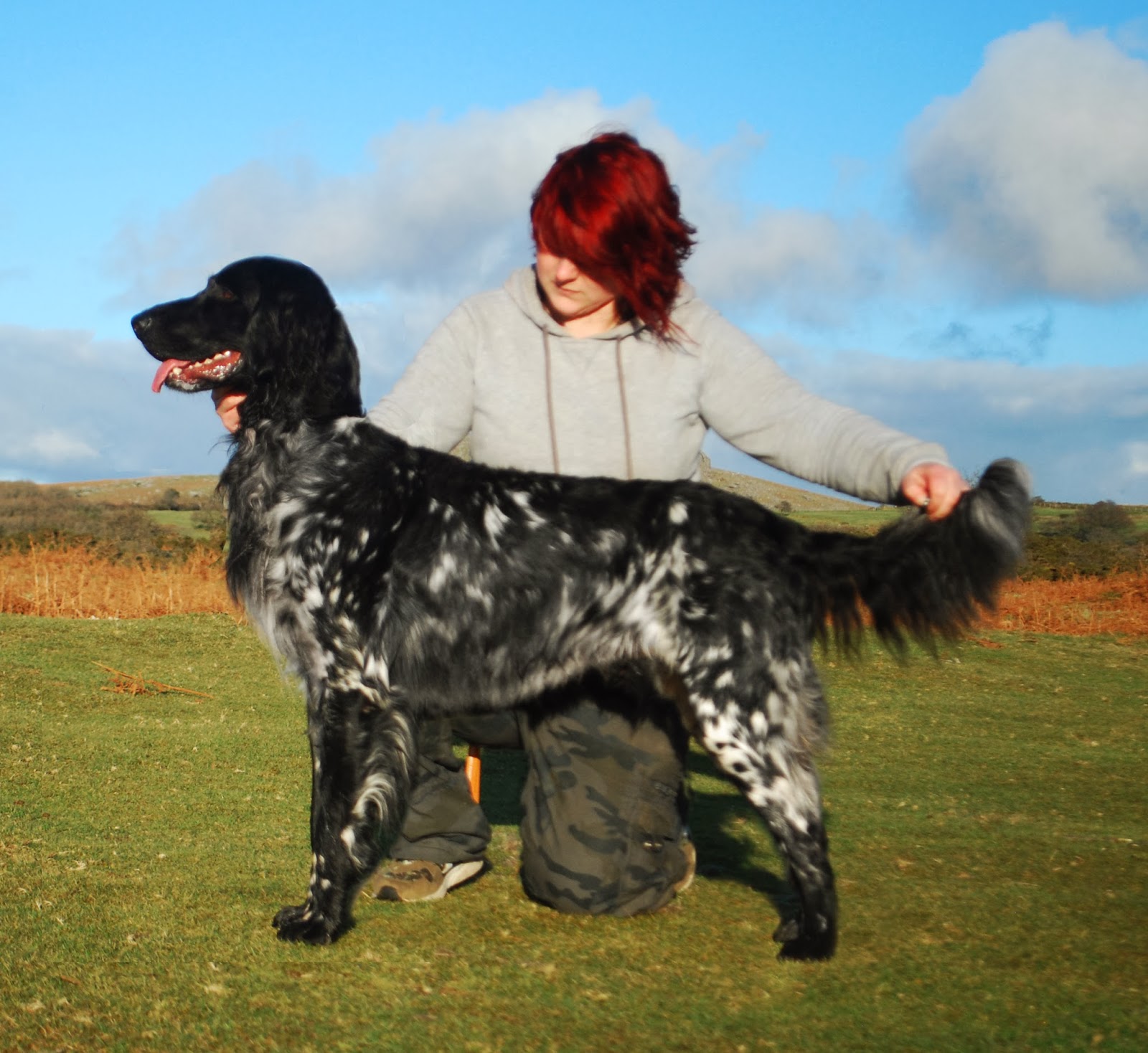 A video from a recent dogsitting job, where they also have two cats.

Rookie doesn't live with cats or spend any time around them, yet he loves this cat soooo much. Big doughnut! Cat isn't convinced.

Well another year has passed, they do seem to go rather quickly, if only we could slow down the time.

2013 has been a good year for us on the whole, just a few blips towards the later part of the year.

The year started off quietly, and no major shows until Welsh Junior of the Year.  We were represented by Cooper (Seahaven Galatic Storm), and Tasha in the handling finals.  No wins here but such an achievement to take part and such an enjoyable and memorable event.

Crufts soon followed with all our our dogs qualified (Maddie, Trio and Tilly), Eve went to stay with my dad as she was too young to attend.  A number of Seahaven dogs had also qualified, LMs Rookie, Morry, Megane and Fae, and tollers Cooper, Milly, Tilly and Nutmeg (who sadly didn't attend due to being in season).

Tasha had also qualifies for the handling finals, her first time in the older category. So pleased to see so many of our dogs awarded at this prestigious show.
﻿ This year also saw all three of our children being selected for the Young Barnlaker's agility team, attending two events over the year.  Sadly not a big enough team to really contend with other teams, but they have all had lots of fun taking part.


Eve (Seahaven Parish Bell) made her debut at Windsor show where she was placed 4th in the World Pup of the Year stakes with an entry of over 40 puppies!  She has been well placed during the summer at both Open and Champ shows, qualifying for Crufts 2014.  She has gained a number of Best Puppy in Breeds and three group placings!

We have attended a number of show during the year with far too many individual success to mention!  A number of dogs have qualified for Crufts and it's going to be an exciting get together in March this year for us all!

It hasn't all been able looking good in the show ring though!  Maddie had some really good placings in agility this year, moving up a grade.  A number of dogs have been taking their gundog training seriously and some have even being used in the field this season, most notably Tally, Eve's sister at such a tender young age.  Well done Mark for putting in the hard work!

Rookie, made his debut in the Obedience ring, just a training round to introduce him,  proving that LMs are not just beautiful dogs but bright too (but with lots of personality!!).  He has also been taking part in Working Trails training and showing a huge enthusiasm for tracking.  Must take after his sister Uma who loves this too.

Tasha and Eleanor have both qualified for Welsh Junior Handler of the year, and will partner Eve and Trio for this event.  They have both also being selected for the Welsh Agility Junior team, where they will reprsent Wales at the OJAC event in March.

The two blips happened within weeks of each other in late summer!  Firstly Trio suffered a torn collateral ligament in her hock, whilst playing in the paddock just a freak accident that couldn't be helped.  Then mum fell badly breaking her leg the following week.  Trio has been making a slow and steady recovery and we are currently building up her fitness, it has meant a early retirement from agility.  A very sad decision but we feel a wise one.  Mum has taken longer to heal though and 4 months post accident she is still visiting hospital trying to get the wound to heal.  The visit last week seemed much more postive and mum will begin physio in the next few weeks which we hope will see her mobile once again.  Mum has been such a help with the dogs over the years, and many will have met her when visiting here or at Crufts.  Sadly she won't be at Crufts this year as she feels that she won't be as mobile as she's like by then.


I do hope that I haven't left anyone out!  Do let me know if I have, none of this is possible without fantastic supportive owners of Seahaven dogs, and great friends. Many haven't found success in the show ring or in a competetive event but have foudn their place as much loved family members, which is the most important achievement of all.  Thank you to you all x

As already mentioned we would like to do well at Welsh Junior, OJAC and Crufts!  We will be attending open and Champ show throughout the year as well as some agility events.

Eve has recently started some agility training and it is hoped that she will make her agility debut latter in the year with Eleanor.

Tilly will partner Eleanor for the Welsh Agility team, and then later in the year we hope that she will be busy with maternity duties!

Maddie will continue to enjoy life as only Maddie does, she will partner Tasha for the Welsh agility team and then have a busy summer of agility.  I do hope to pinch her back for myself sometimes!

Trio will partner Tasha for handling, she has been sadly missed by Tasha since her accident.  We then hope to keep her busy by maternity duties too!