Morry on his hols!

Tomorrow we say goodbye to Morry as he heads back home.  It will be sad to see him go, Eve especially have grown quite attached to him and they are great play mates.  As usual he has just fitted into our home, making us feel that he has always been here.

Some pics of Morry enjoying his time with us here in Pembs.

Posted by Seahaven at 11:49 No comments:

It's been a busy weekend for some of the Seahaven dogs!  Today we took Eve and Morry to Langstone Open show, to give the younger members some addition practice, and to support the NSDTR classes that had been put on.

Eve had a 2nd in the Graduate Class, and was awarded Best Puppy in Breed under Ann Stephenson.

There were no LM classes for Morry and so he had to go into the Open AVNSC class as no Junior class or PG.  Didn't expect much from this, just wanted him to have some more practice in the ring.  Bless him, he behaved beautifully and won the class against some lovely mature dogs!

The dogs had been moved inside at this point as it was rather hot out side, Eve showed nicely for Tasha and was awarded Group 3!! So very proud of this baby, only just 7 months.

Morry was a bit more distracted with so many dogs in the indoor ring, but did settle eventually.  He didn't get a group placing, just very pleased to have had him (and Eve) in a Group ring.

Today was the Pembs Canine open show, and for the first time hosted classes for both Large Munsterlanders and NSDTRs.  Both classes were well supported by us and Seahaven dogs, Thankyou to the owners for travelling to support the show.  It was a lovely oppertunity to catch up with friends and see how the dogs are coming along.  A number of Tilly's (and Red's!) puppies came along and it was the first show for two of these.  Mory is with us for his holiday and so was able to enter, adding an extra Seahaven dog to the event.

Guess who's come to visit?

The lovely Morry has come to visit whilst his family have a much deserved holiday.  Eve came to keep me company whilst we met and collected him from Kathryn at Aberystwyth.  She was such a good traveller, not bothered at being on her own in the car for the journey.  As we arrived a bit early we had a nice walk along the river, and on our return Kathryn and family had arrived - such good timing!

Eve took an instant liking to Morry, and couldn't wait to introduce herself.  We all had a walk, before saying our goodbyes for now and heading off in different directions again.

Morry went straight into the garden on arriving home to meet the others, and it was as if he hasn't been away.  They are all out with the children now, having a great time.

Have a lovely holiday Kathryn and family. 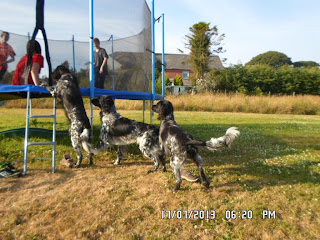 Posted by Seahaven at 19:39 No comments:

Too Hot To Travel and East of England Show

Well the weather has been wonderful the last week or so. Perhaps a bit too warm as we had to cancel our trip with Megane to the Munsterlander Beginners Gun Dog training day that took place yesterday in Spilsby, Lincs. The drive would have been a 10 hour round trip - too long in all this heat! This was a great disappointment to us all as it would have been brilliant to have the chance to see how she should be doing things if we ever want to work her.  Megane was looking forward to being able to have a good go in the water!. This event only happens once a year so lets hope we get there in 2014


Sunday 7th July we went to the East of England Championship Show
Another warm day and an early start! This was my turn to run Megane so hoped that I wouldn't let her down ! Megane was very good and we achieved a 2nd so we were very happy and we achieved qualification for Crufts!
Like all girls Megane likes to do a bit of shopping (especially when her daddy is there with his wallet!) so after her class and having had a great time chatting with other Munster owners and Megane saying hello to their dogs we headed to a couple of stands to have a look. She found the treats she likes and also got a couple of nyla bones. Most importantly we found the ice cream van and David bought us all a vanilla ice cream - Megane can be seen below enjoying her own ice cream 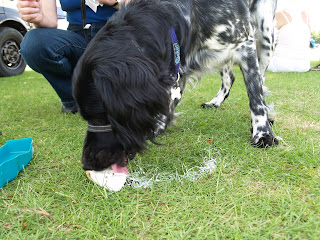 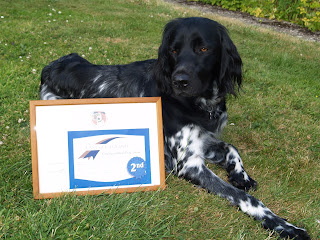 Looking quite happy with herself with her 2nd place certificate 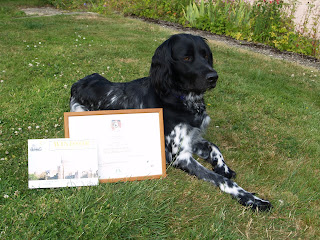 Megane with her Good Citizen's Bronze test certificate and Windsor 3rd in class certificate! I think she looks quite proud of them!

The weather has been so hot this last week, and I've never known the dogs be so quiet.  It has made exercising slightly more difficult, trying to avoid the hotest parts of the day and road work has been out of the question as the tarmac has been so hot throughout the day.

Our local beach has been a real bonus, but tonight we visited Newgale as it was low tide and being quite a long beach gave the oppertunity for a good run.  It was great to talk to a few people who knew what breeds they were, we're always rather impressed by this! 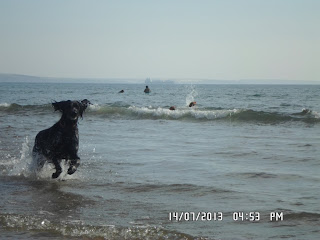 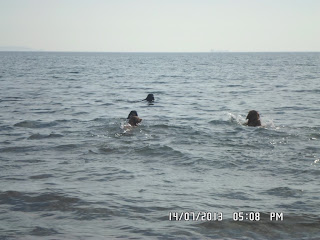 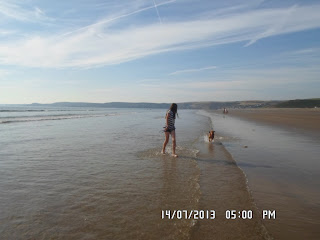 Maddie Becomes a Veteran & Celebrates in Style at Tuffley.

Maddie became a veteran on Sunday, reaching the grand age of 7!  I'm sure that she won't agree with the title of veteran, and she shows no inclination of slowing down or acting her age.  Much to our relief.

She spent her birthday weekend away at Berkely Castle for Tuffley Champ Agility Show.  The weather was glorious, a far cry from the bleak weather of last years show.  A fantastic setting in the shadow of the castle with a river running through the showground, this gave the dogs some welcome relief from the heat.

Maddie had a 6th place on the Saturday in a large agility class, and all picked up numerous clear rounds over the weekend.  Trio and Tilly had some fab rounds with the girls, and are building up their confidence nicely.