An Introduction to Gundog Working Tests

Recently we took a small step in to the unknown - Working Tests!

After helping out at the Hall Barn Working Test, which was run by the Large Munsterlander Club we were keen to have a go with Lyric (even before she was a reality!). The main difficulty that we've encountered was that there is no HPR training in our area. Thanks to the input of many friends we have been able to undertake some training, though lacking the confidence of knowing whether we were really getting it correct.

We were informed that the LHPA were holding a WT near Malmesbury in Wilts in June, so took the plunge and entered. No one knew that we were attending, it was much easier with no questions or feeling of pressure that way.  So we arrived last Sunday to a rather wet field on an estate in Wilts, with the intention of having a bit of fun and learning lots.

Lyric was entered in the puppy WT, this is classified as for pups between 6 -18 months of age, and a huge class of 18 puppies. 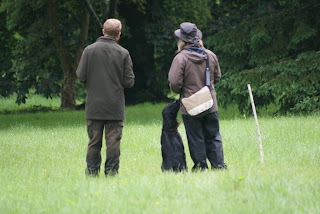 A puppy WT is broken down in to 4 parts; hunting;obedience;seen retrieve & water retrieve. The hunting is scored out of 40 and the other parts worth 20 each.

Hunting has been our nemesis, an area that I have no experience in even though we've had a HPR breed for a number of years.  Lyric is also quite a mummy's girl and needs to take herself further away from me, this is coming as she gets more confident, but is taking some time. The other parts I thought might be ok. She is very keen to retrieve, so thought that she might not do so well in the obedience, depending on how distracted she became. I thought that the seen and water retrieve would be her more confident elements.

Hunting - well she did hunt, she worked away from me for some of this but struggled at times to find any scent on the very light breeze.  She stopped on the stop whistle, something we haven't done much with and then recalled quickly to me. I was so pleased with how she had gone for me, not a high score, but not a 0 as I thought she might have got on this element. 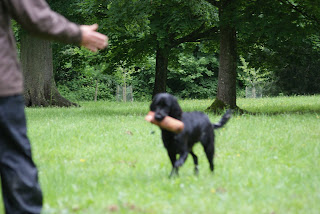 Seen retrieve - The puppy's were expected to to sit quietly off lead whilst a dummy was thrown about 20 metres ahead of us.  The dummy thrower was hidden in a fir tree and the dummy was thrown out to the side of  but under the canopy of a large tree opposite.  The dummy was in a slight dip and in shadow, this caused a lot of confusion for a number of the pups as they couldn't 'mark' where it had dropped. Lyric's problem was that she didn't see it being thrown at all, there was a pile of dummy's to the side of her which she was so focused on that she didn't see the dummy thrown or land.  We haven't worked on any 'blind' retrieves yet with her, and so it was almost impossible to send her out to it. With a lot of assistance she managed to find it, but were heavily penalised as a result.

Obedience - The pups were asked to heel alongside their handler from one flag to the next. At the second flag they had to sit whilst the handler carried on to the third flag where a dummy as thrown out, the flags being about 15-20 metres apart. The handler then returned to the dog, and carried on past it to the starting position where the dog was recalled. When the dog had settled they were then sent out to retrieve the dummy and return to the handler.  Lyric tried so hard on this test, and was a bit let down by me and my lack of knowledge on how this was to be marked.  Lyric broke the sit when I first left her on the second flag, I had only given one command expecting to be penalised for additional commands if I used them.  I knew when she broke the sit that she wasn't feeling confident so from that point on I used lots of additional commands and praise. She then completed the rest of the test really well, 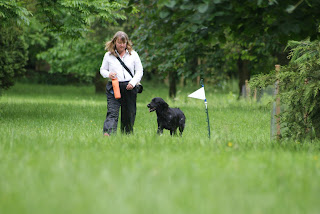 Water retrieve - The dogs were sat on the bank of a small lake with a shallow entry, a dummy was thrown and when instructed were then sent out to retrieve and bring back.  This I thought would be Lyric in her element, she loves water and is confident - the only issue that might pose a problem would be her keenness and she would go before instructed.  Bless her, she went when asked, confidently entered the water and swam out to the dummy. She then nudged it with her nose and turned to come back, after a bit of time on the bank where she tried to bring back some sticks I managed to send her back out to the dummy which was now much further away as it drifted. She did exactly the same again! The judge was as dumbfounded as I was and suggested that I threw in my own dummy, She retrieved her own dummy perfectly! Really don't know why she had any issue with this, she had previously retrieved a mix of other dummy's in the other parts of the test. 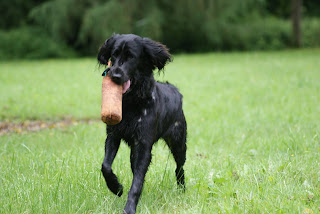 We didn't score 0 in any part, which was fantastic and we weren't last either! Lots of things to work on, but what a fun day we had.  Such a great introduction to the world of WTs, all helped by our fabulous judge who was so encouraging and the others competitors especially the other LM who were present.
Posted by Seahaven at 14:46 No comments: