After a lot of thought and consideration we decided to go ahead and mate Trio!  As her season was so late and we knew that she could go even longer until the next season we thought that it was time to have another litter.  This did make planning this slightly problematic, as we were planning on having her eyes tested when we go The National Dog Show in May as she was due a eye test.  Thankfully there was a clinic being held in Swansea yesterday and we hoped that we could get an early appointment, however as it was Easter we couldn't get hold of the clinic to make an appointment.  Thankfully Mr Cormie was very accommodating and fitted us in at short notice, this would enable us to have the test and then travel north to Alfie.

The day didn't start well with us planning on arriving in Swansea early to at least be available if the clinic was running ahead of time and have the eye drops in.  We managed to set of at a decent time but after ten miles realised that I'd left my purse at home!  So a quick return which initially delayed us by half an hour, the traffic was dreadful as the rain was creating a lot of spray on the road and visibility was poor. We arrived at the clinic as Mr Cormie arrived and he put drops into Trio's eyes straight away so that he could test her as soon as he had set up.  As she was in season we left her in the car until the last minute, when we did go in it was a German convention!  A LM, two Schnauzers, and a Doberman!  Thankfully all was well and she got a A1 pass!!

We were all set to travel up to meet with Alfie!  Just over four hours later we arrived in Rotherham, Lynn had kindly agreed to meet us there to save us travelling another hour to her house.  A quick cup of tea and a catch up with Lynn, Christine and Ray and then down to business.

Alfie was a complete gentleman, and after a little bit of coaxing got down to business.  Trio wasn't the usual wanton hussy and took some persuasion! However we did have a successful mating and a good tie of 20 minutes.

After travelling all the way up it was then time to travel home, and finally arrived home in the early hours of Thursday.  We did have a bit if fun (only word for it!) on the M43 at Birmingham trying to get on the M5, we passed the sign for Shirley more times than I'd have liked!  We even managed to very nearly visit Lucy's old house just off the A45, how the satnav sent us there I'll never know!  Over 10 hours of driving and over 600 miles, we certainly travel for the best.

Now it's time to wait and see if we have the patter of paws at the end of June!
Posted by Seahaven at 15:08 4 comments:

Well - seems like ages since I've written anything so just a quick catch up.

Today we went to the West Country Dog Show in Thornbury Leisure Centre. We really like this show - easy to get to, good free parking, acres of fields and woods to run around after, and lots of space in the hall to strut your stuff. A really well run show. Toller classes too which is welcomed in an Open show. I was in Post Graduate. There were only two classes, with Open as well. Fifteen toller entries - for an Open show that is really good. I went well and got a Third - not as good as last year, but it was a tougher class.

On Saturday I'm in WELKS in Malvern, then early in May it's up to Stafford. So a bit of travelling to come. I love the shows but not the ring too much. I like to meet all the other dogs and have a good scream when I see others getting excited. I'm also at the age now when I'll tell off any other testosterone fuelled dogs if they push their face into mine. Hey - I know I get a row for it but you can't be a shrinking violet all your life! It's all handbags really - I'm fine in the ring.

Had some fun last week with a few walks along Neath Canal. A bit of excitement one day in particular when I detected a distinct "duck" smell down an embankment off the side of the canal. Rushed down to have a closer look and a huge Mammy Mallard took off. And you know what was under her - a load of lovely looking eggies. I sniffed all around them - they smelled really good - they looked even better. But then Dad screamed at me to come back before I could have any for breakfast. Pity - because I'm sure they'd have been delicious. Dad took me back the next day - on a lead at this part - to check everything was OK and lo and behold, Mammy Mallard was back in the same place, keeping the eggs nice and cosy. I can't wait to see those little ducklings swimming in my canal! 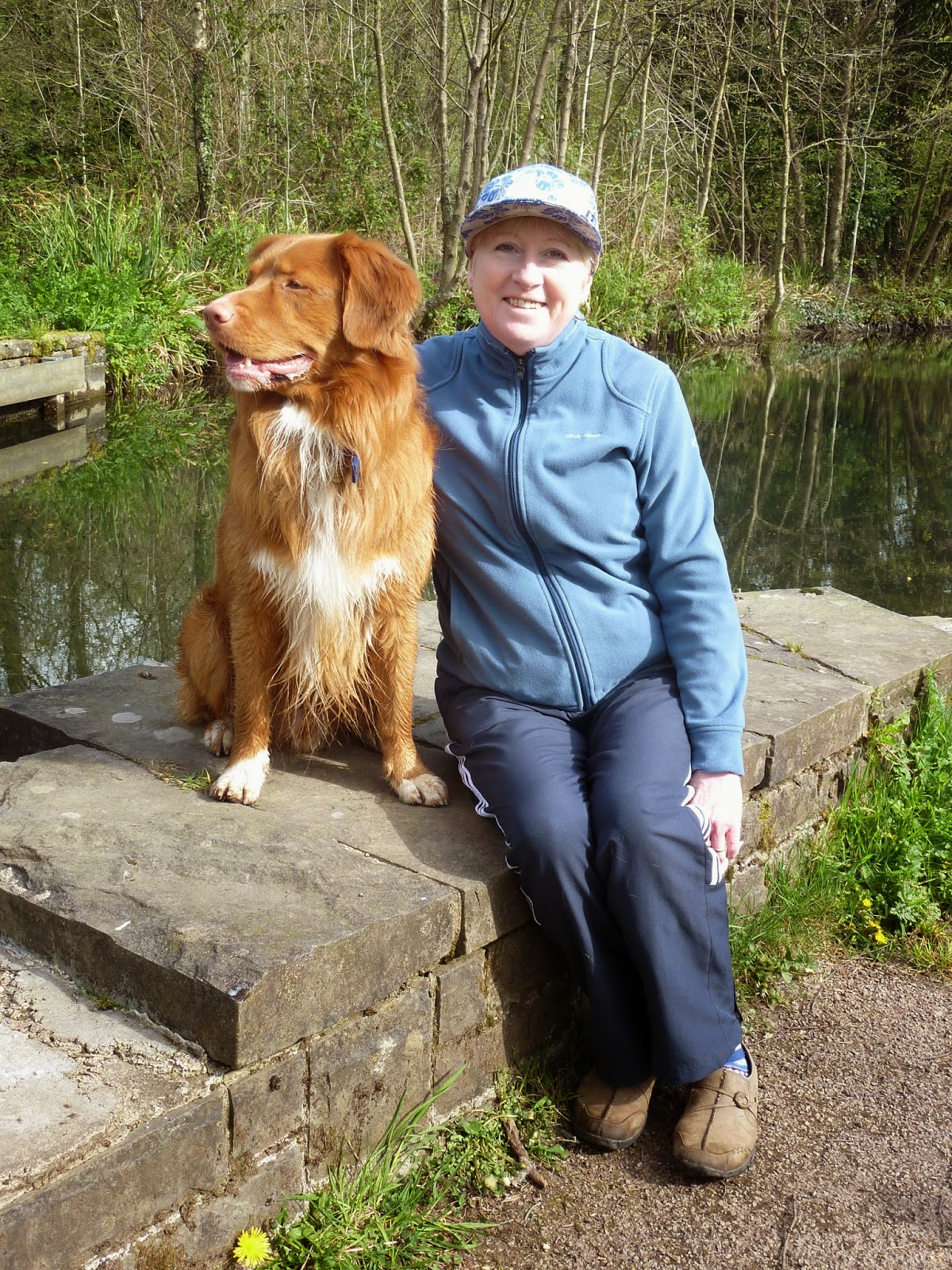 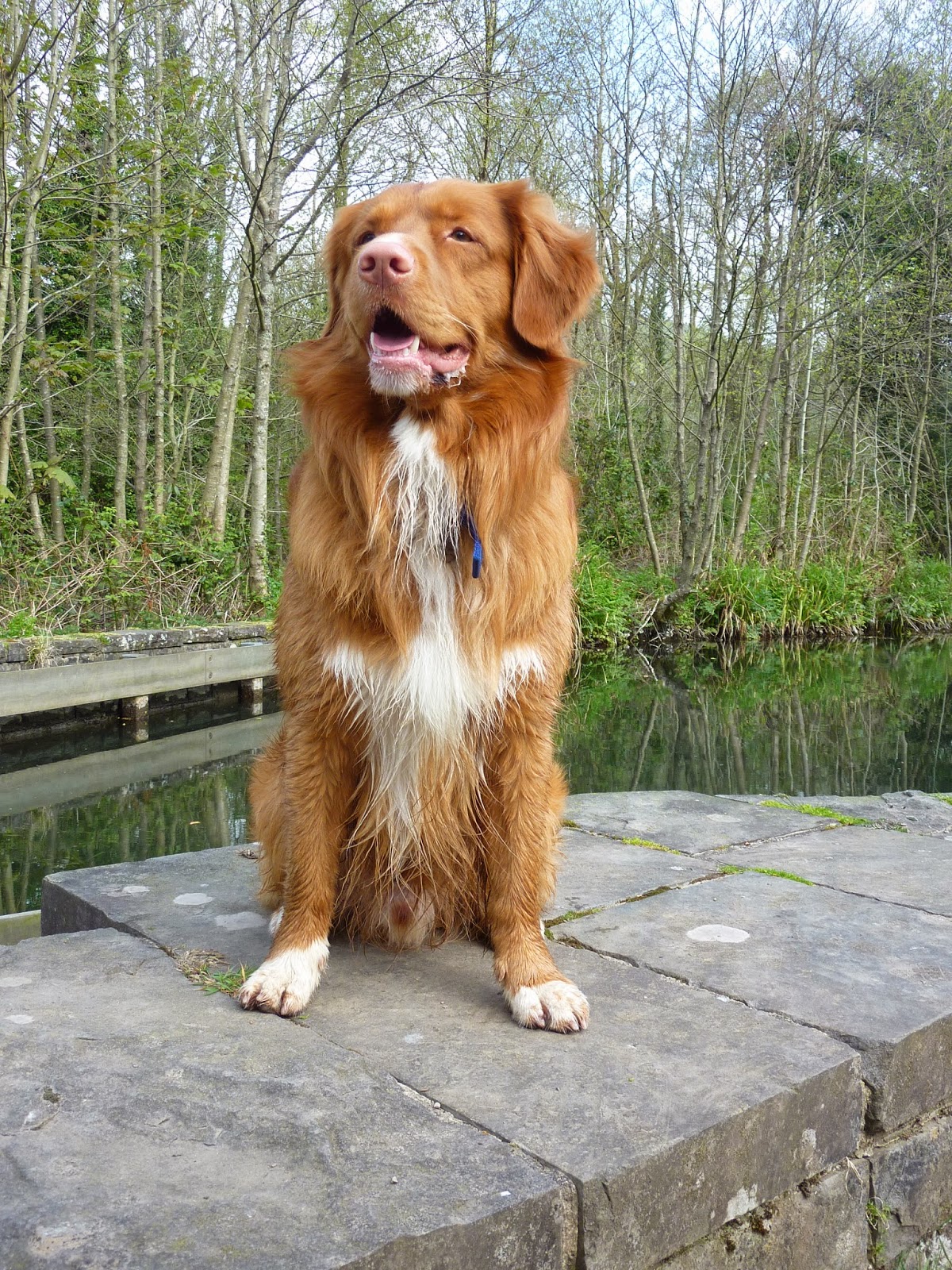 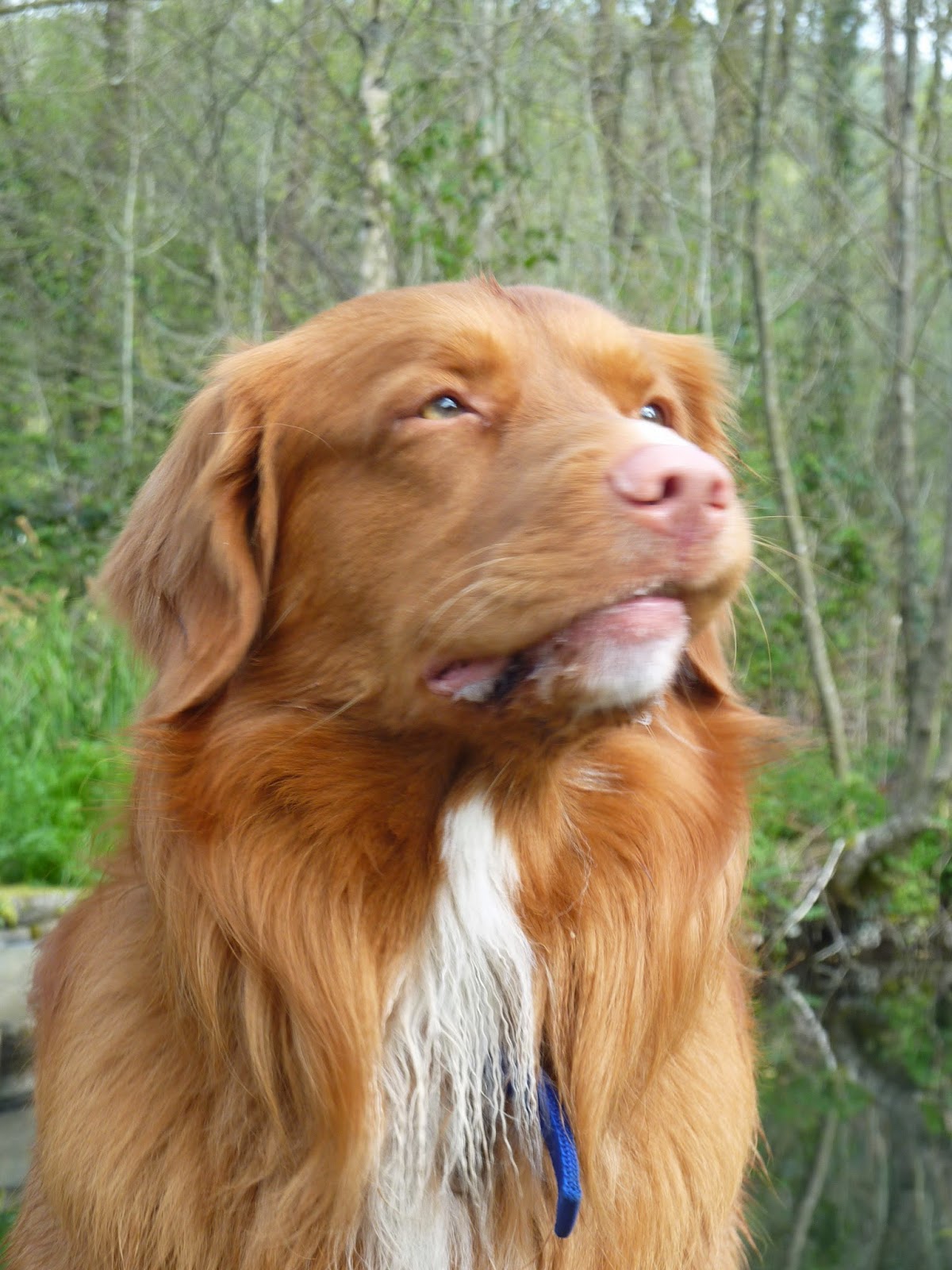 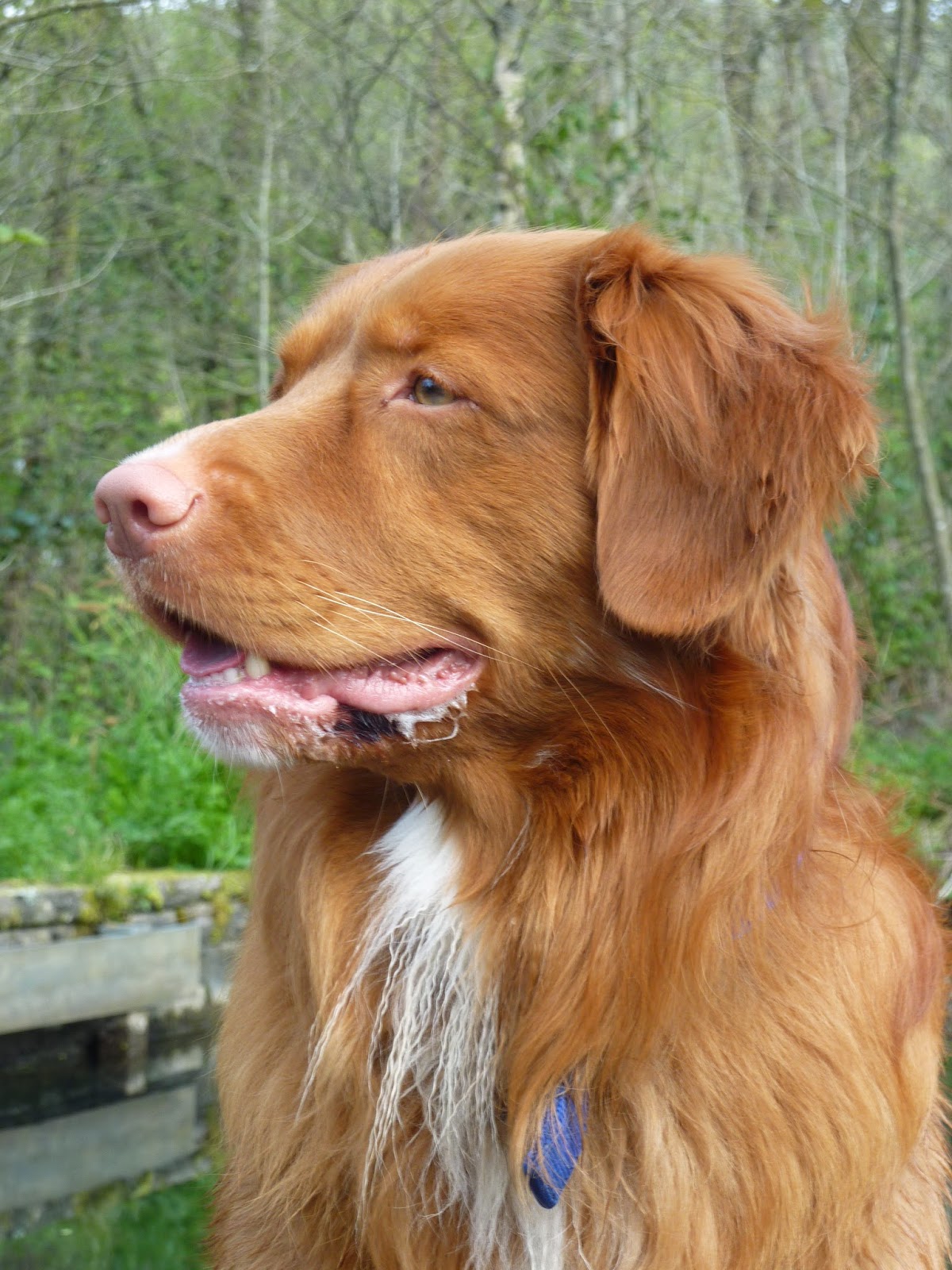 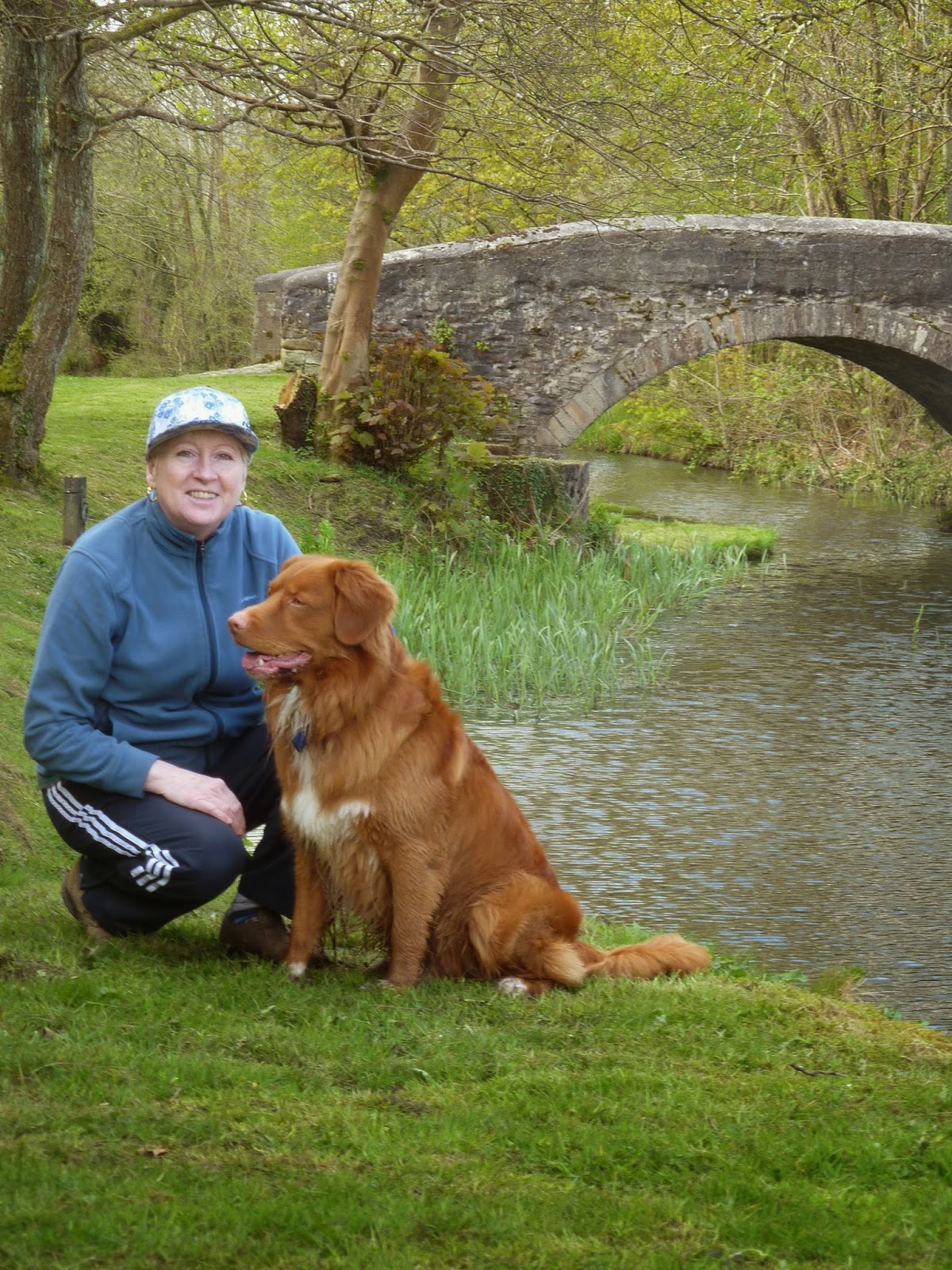 Having a Relaxing Spring

Well after such a busy start to the year, we've been having a more restful April and it hasn't done any of us any harm at all!

The dogs have been enjoying some nice walks, and it's been so much easier with the drier weather and lighter evenings.  We've even managed to get some of the agility equipment out now that the ground has dried up, and Eve will start her agility classes in a few weeks time.  Eleanor has been introducing her to some foundation work and she is very keen to work for her, so all is looking positive.

We have changed our vehicle back to a van, and just need to oganise caging to have it ready to go for the show season.  It was sad to say goodbye to the Tepee, but another member joining the Seahaven dog family we just needed the extra room.

The tollers are being walked separately at the moment due to both Maddie and Trio being in season.  It's amazing the difference in how the dogs act on their walks depending on who's with who.  The munsters really do encourage the tollers to move when they're all out together.  On the plus side they have been much more enthusiastic to swim, as they are so keen with the munstes as they get to the retrieve first. 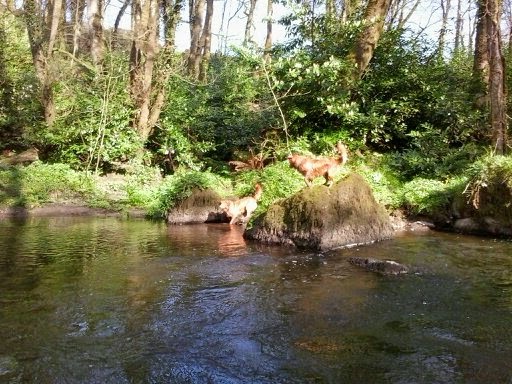 Trio is late coming into season, and we are planning a litter from her. Do we mate her this time, or do we wait until next season?  Really not sure what to do, we have some people on our puppy list, but would prefer to have some more before going ahead with a mating.  If we wait we may well lose some of these!!  If anyone is considering a LM puppy please do get in touch for a chat.