Donna has told the story about the remarkable day for Seahaven at the Toller Championship Show on 20 March. I'd just like to add some thoughts from my own angle - after all, it was my sisters and me, and of course, Mammy Tilly, that brought the prizes home.

I have to say I'm beginning to feel like a man in a woman's world. The storyline has in it Donna, Natasha, Eleanor, Dawn (my owner), Tilly, Eve, Tegan (and her owner, Janice Russell), and the judge on the day, Elaine Whitehill. Then there's me - the only male.  Oh, I forgot - my driver, Dad. It's a good job I get to spend a lot of time doing men things with him in the week.

Anyway, back to the important points. I'd like to specially thank Natasha for getting the very best out of me. I am delighted it all worked out so well, and I'll do anything for that gorgeous livercake. I'm sure it won't be the last time we team up. In fact I'd like to thank EVERYONE who has ever had any input into my training and development - way too many to mention but you all know who you are. I'm also delighted for the brilliant performance of half-sister Tegan, and younger sister Eve who with Eleanor achieved something amazing for one so young. Tegan's even younger, of course - I'm beginning to feel like a pensioner!

There won't have been many occasions in show history where in a Championship Breed Show a breeder sees one of her dogs and bitches going up against each other for Best in Show - then on top of that both handled by the daughters of the breeder. In fact - it's probably unique. Just imagine how Donna felt. In fact have a look at how excited she was when Eve got Best Bitch and Tegan Reserve Best Bitch - that alone is quite incredible. 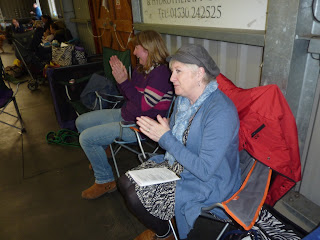 Look how cool my Mam looks though. Takes it all in her stride that one.

Anyway, enough of the talk - let's have a gawk. Here's some of the snaps from the day.

The Club show is one of the shows that we travel the furthest to, Thankfully it has a later start of 11am which makes it all that more bearable, especially as it is so close after Crufts.

Tasha was handling Cooper (Seahaven Galactic Storm) so we needed to be there in time for Open Dog, which we managed to do in good time.  Cooper went like a dream in the class, competing against some lovely dogs - and his first time in an Open class at a champ show.  When he won the class we were all speachless, Dawn and Gerald, his owners were thrilled.  It wasn't long before he was back in the ring to compete against the unbeaten dogs for the award of Best Dog.  Dawn and I sat and contemplated the line up, not believing that he would be awarded the CC and Best Dog award.  After what seemed like several nail biting minutes for breed specialist judge Elaine Whitehill to decide, she finally moves towards Cooper and handed the rosette to Tasha. This was Cooper's first CC, and we were all so delighted. 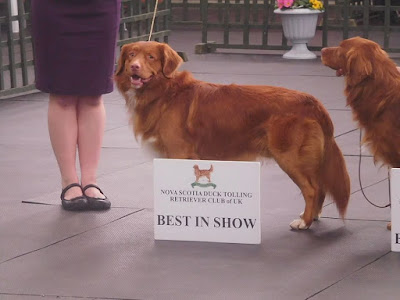 Cooper couldn't rest yet! Tasha was handling him in the Junior Handling class which was held over the lunch break, Eleanor was also competing with Tilly, the first time in ages that Tilly has been used for JH.  They both worked the dogs really well, Tilly was so excited to be in a show that she didn't really concentrate for Eleanor, but it was lovely to see her enjoying herself. Tasha won, with Eleanor second, Tasha then beating the other winners to be awarded best handler in show.

After a little break the bitch classes started.  Tilly was in first competing in Veteran Bitch, she was awarded a 3rd in a really strong class.

Tegan (Seahaven Bewitched by Cedarlake) was also there and entered in Junior and Yearling Bitch classes.  At only 17 months, so only just into Junior, she won, and then won Yearling too! 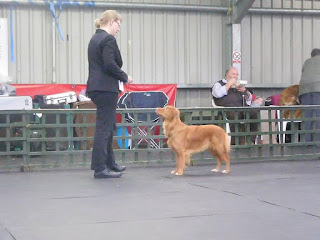 Eve (Seahaven Parish Bell) was competing in Limit, with one of the biggest entries of the day. Again a really lovely class and she went beautifully for Eleanor and won the class. Again, we were all so thrilled with the result. She still needed to go in the Special Working Bitch class, and again she won the class.  This then meant that she could contest for Best Bitch as she was unbeaten. 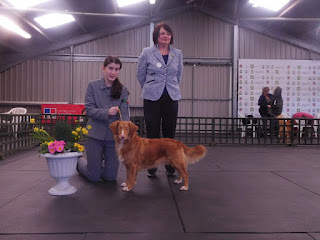 It was lovely to see both Eve and Tegan in the bitch line up, and we really didn't expect anything else - we had had such a wonderful day anyway.

Well it didn't stop there!  Eve, again after a lot of consideration from Judge Elaine Whitehill awarded Eve the CC and Best Bitch award.  The excitement continued when Tegan was awarded the Reserve CC, such an achievement at such a young age.

The girls - Tasha handling Cooper, and Eleanor  handling Eve then had to compete against each other for BIS to be awarded.  After a lot of moving them around the ring the award went to Cooper.

What we achieved I doubt that we will ever achieve again, such a special day.  All thanks go to Tilly (Dinaskarrek's Red Vixen at Seahaven) who is the very, very proud mum of these dogs.  Each litter represented and all such lovely examples of the breed.

Huge thanks go to the club and hard working committee, who put in so much hard work both on the day and prior (and after!) the show to make it a success.  Also thanks to those that support us, owners and friends - we've had numerous messages congratulating us and sharing in our good news.  But special thanks to our lovely dogs for being such lovely family members.
Posted by Seahaven at 10:47 3 comments:

Clever Tegan did rather well at Crufts! 1st place! 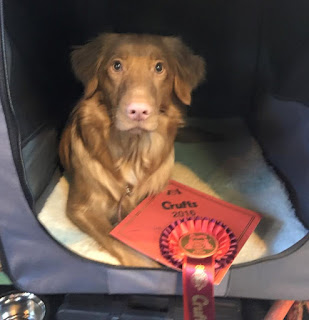 Tegan (Seahaven Bewitched By Cedarlake) looking all grown up :-)
Off to her first Crufts next week! 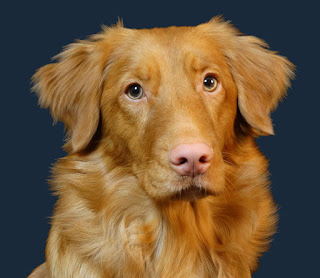