Well due to all the ups and downs that the year has brought so far the blog has been rather neglected. Now that things are starting to return to normal, I thought that it was an appropriate time to give it a much needed update.

It is so lovely to be back out with the dogs again after a prolonged enforced rest, the family have done such a good job of providing them with both mental and physical stimulation which has been much appreciated.  It has meant though that Lyric hasn't had the one to one training that I had hoped for her, we are hoping to catch up with some of the gun dog training and also hope to make it to a few gun dog working tests again this year.

The girls and dogs have managed to get to a few shows where I've spectated, and they have done a great job as always. Summer is now fast approaching and I'm really looking forward to getting out and about again.

We did manage to get to Bath show last weekend, and it was such a lovely opportunity to see the grandpups again (Rookie - Seahaven Commander at Hartenziel being the sire).  We managed to meet Nyx and Drake again, and also to meet their sister Pip too, along with Bea their mum. They are turning into such lovely young munsters, and Drake won Best Puppy in Breed from a good puppy entry. A very good day indeed. 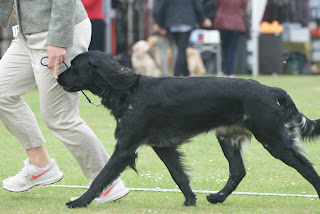 Lyric showed beautifully in Post Grad and was 2nd in a good class, she's still looking rather babyish, so I was delighted with this result.

We also took Eve along and she won Open Bitch in the NSDTRs and then went on to be awarded Reserve Best Bitch. I showed Eve, which is something that I haven't done in such a long time and she moved beautifully for me - full of drive. She wasn't too keen on standing still though, she really had ants in her pants!


Now to get out and do some training now with Lyric, we have lost time to catch up on!
Posted by Seahaven at 19:44